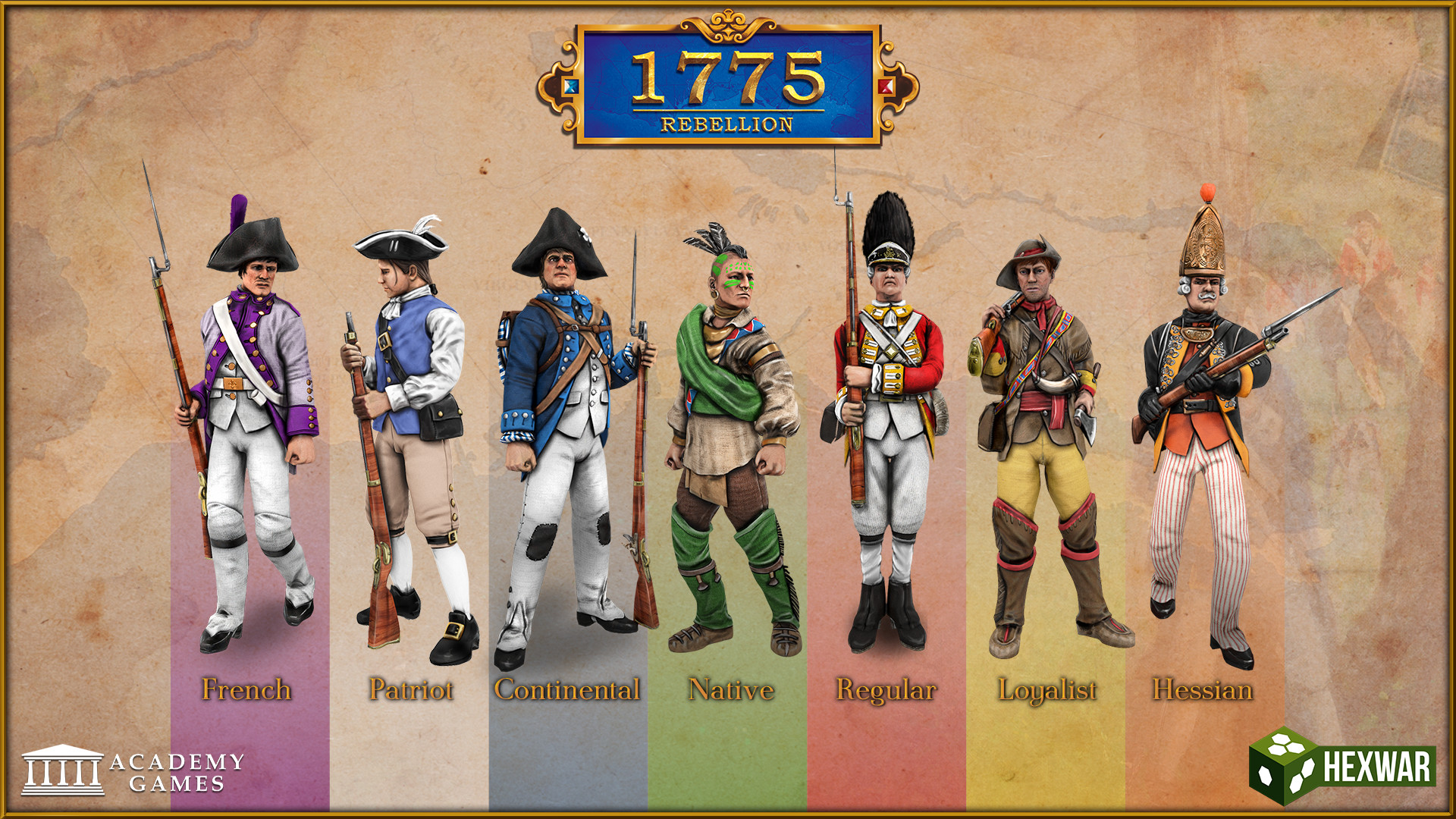 The year is 1775. The American colonies are outraged over new taxes imposed upon them by Great Britain. They begin to stockpile arms and organize militia. On April 18th, militia members ambush a column of 700 British Redcoats ordered to seize stockpiled arms. 273 British soldiers are killed or wounded before they reach safety in Boston.

The American Revolution has begun!

Now you and your friends command the armies of the British Redcoats, English Loyalists, German Hessians, American Regulars, Patriots, French Regulars and Native Americans to decide the fate of the Americas. Players from each faction cooperate to gain control of key towns and forts. Share the fun in this light and fast paced game vs the AI, hotseat or online!

1775: Rebellion is based on the award winning board game developed by Academy Games.

The mapboard represents the original 13 Colonies plus Maine, Nova Scotia, and Quebec. Each Colony is further subdivided into areas over which factions will struggle for control. A faction holds control of a Colony when only units of its side are present in the areas of a Colony. Player controlled factions include the Continental Army, Patriot Militia, British Regulars and Loyalist Militia. In addition to this the Allied French and Allied Hessian factions, which are controlled by American and British forces respectively, can be brought into the game by event cards playable by each faction.

Each game is played in a series of rounds. Victory conditions are checked for each side starting on round three and each game ends with victory points being tallied automatically on round eight if no one has won before then. Each round is subdivided into four turns, one for each side, which happen in order determined by a blind draw of the turn marker for each faction. It is entirely possible for a faction to go last in a previous round only to go first in the next.

Every Faction has a deck of cards consisting of Event cards, Movement cards, and one Truce card. Every turn, each faction will play a movement card to maneuver their troops and any number of event cards. When both factions of a side (British or American) have played their truce cards, the game will end! Each deck has a specific number of movement cards in it and managing them is an important part of the game.

Each faction has a Truce card which serves not only as a timer for the game but as a powerful Movement card. However, a game may end prematurely if both factions of a side are forced to play it early in the game.

Each faction, including Allies have their own faction combat dice. For each ‘Hit’ symbol, the opposing faction loses one unit. For each ‘Flee’result you lose one of your units to the Fled Units box where it will return later as a reinforcement. For each blank face rolled the player has a ‘Command Decision’ and may use that to retreat a unit in the battle to an adjacent area.

All faction units participate in a battle whether is is their turn or not! Each faction has different faces to their dice. Some factions are more likely to flee from battle to regroup later on. Other factions are more likely to score a hit or a command decision. American Continental Army are much less likely to flee, an have a higher hit percentage, but only have two dice per battle round. British Regulars have no flee results and hit on on a high percentage, but will have no fleeing units added to their reinforcements each turn. Militia on both sides have three dice but higher fled results. Knowing your units strengths and weaknesses is key to victory!

Battle across the Colonies with large armies or small. So long as each army group contains a unit of your faction, you may move units of your partner faction as well as Allied units with you from area to area. In a four player game, each faction must strategise with their partner to maximize potential!

1775: Rebellion features simple and unique game mechanics and special attention to historical detail. Experience this critical time in American history, you will not be disappointed! 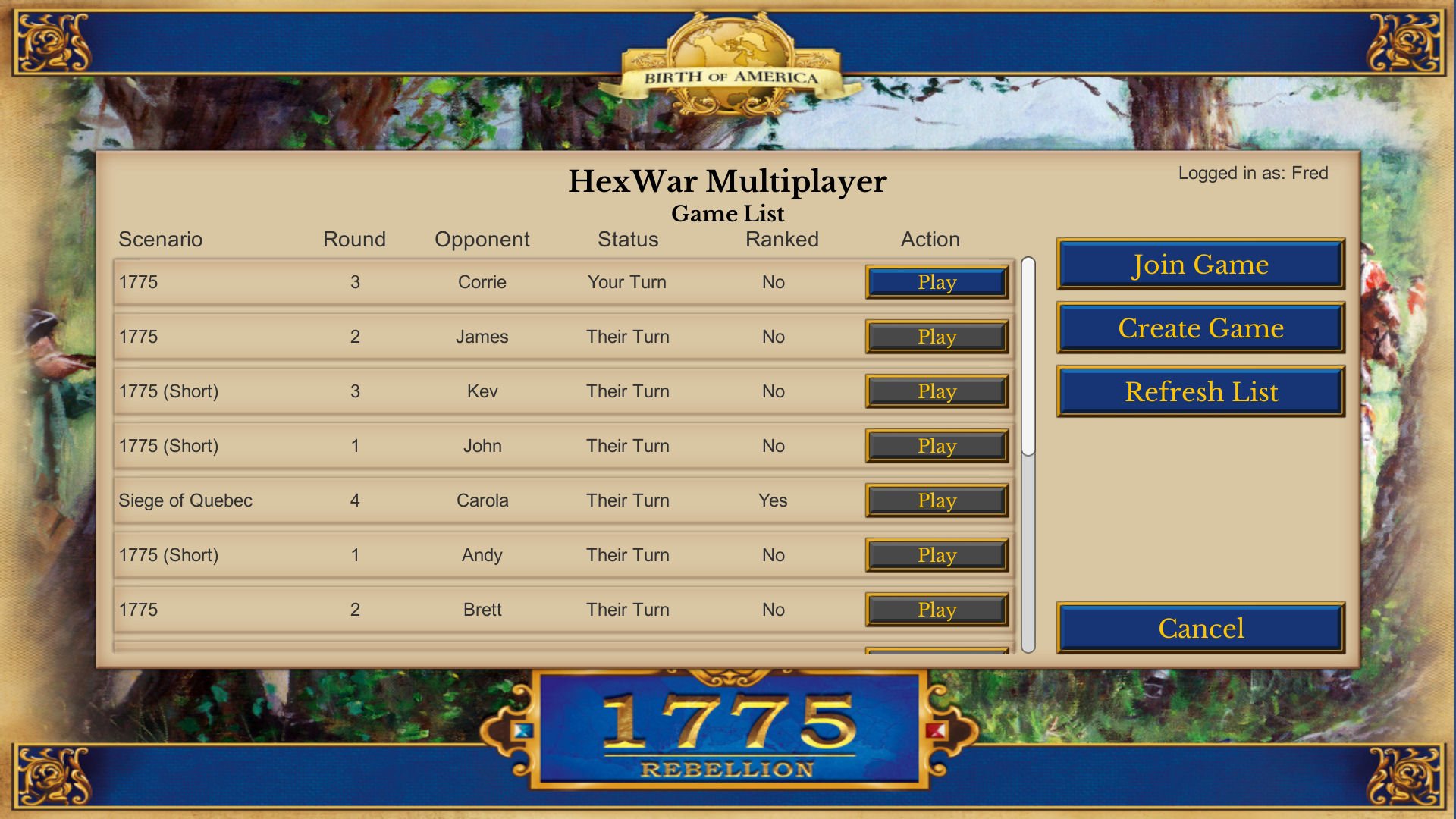 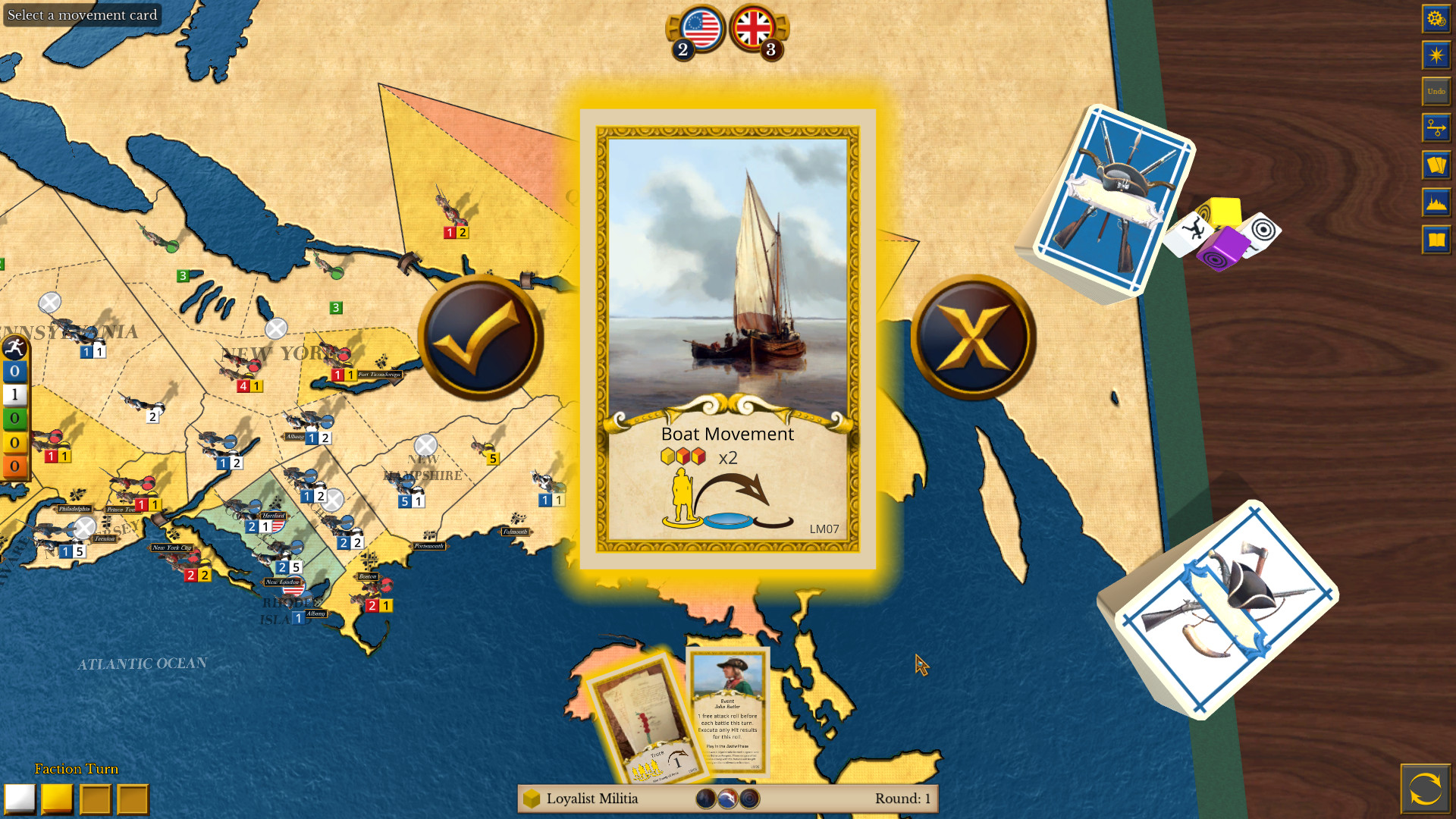 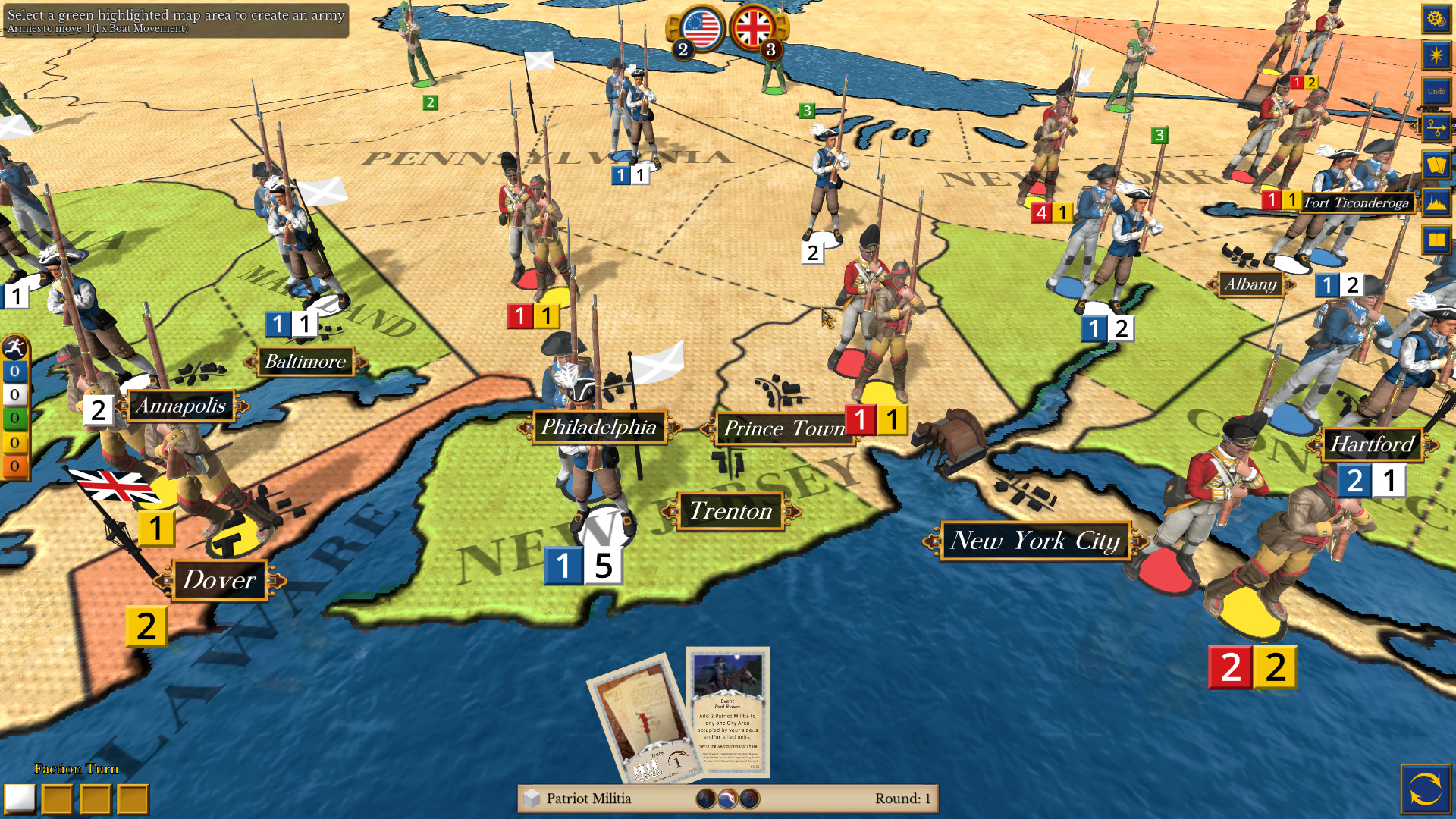 Unfortunately there's no way you can speed up the slow sea transporation or skip the dice rolls. Speaking of dice rolls, the computer seems to have loaded dice. I'll send my massive army only to have half of them run away, while the rest get cut down by the tiny army of the computer's - nine times out of ten, it rolls hits. It's like the Keystone Cops armed with plastic cutlery versus 1\/2 a T-800. It suffers from the same the cheaty-mc-cheat-cheat dice from 2007's RISK.. Great game that accuately embodies the board game of the same name. The AI needs improvement so I am looking forward to the upgrade, but otherwise very enjoyable. Hope to see the other games in the series on Steam soon!. Overall, 1775 does a great job in translating a good board game to the PC. If you don't mind playing an AI that is less than competitive --- even on the hardest setting --- or you just want to learn the rules of the game playing solitaire you will enjoy this title. I found the graphics and art appropriate.

If you are like me and want to play the game with other people then that is where 1775 fails miserably. While the game states it supports multiplayer --- several types of multiplayer --- in it's current implementation it is not usable. The "online" multiplayer is really glorified play by email but worse. When it comes time for your opponents turn the game screen closes to the main menu --- you are not able to even view the board! --- and all decisions that are supposed to involve you are handled by the AI (poorly?). In reality you are playing when it's only your turn or 50% of the time. Completely unaccpetable. Once I discovered this I decided to try the local multiplayer thinking the developers provided this option knowing that some people will not enjoy the asynchronous, let the AI make my moves during the other persons turn and during this time I see none of what transpires option. It works extremely well EXCEPT information that is supposed to be private --- the cards in the current player's hand --- are publicly visible with no ability to hide them. A simple click-to-show option solves the problem but is missing.

For me the lack of a functional multiplayer option is a dealbreaker. Had I known in advance how multiplayer is implemented I definitely would not have purchased the game at any price let alone the $25 retail price. I am hopeful HexWar is planning enhancements to the multiplayer functionality, but they have not responded to my inquiries on this topic.

[EDIT] HexWar has been extremely responsive and added a feature to allow toggling card visibility so there is at least one viable multiplayer option. Now, with a an optional multiplayer mode our group can actually play the game.. No really.. love the board game and this is a faithful rendition of it, no need for the long setup of the board game because its all taken care of by the PC. So, for any strategy game lover , this will certainly satisfy. Nice capture of history in an enjoyable turn base war game.. I am experienced player of the original board game. I bought this PC version of the game when it first came out and the developers has done a great job fixing all the bugs. They have been very responsive. Currently at v1.05 I have yet to find any bugs. At its hardest level the AI can be beaten many times but not easily. The AI is challenging and requires your concentration. However, the AI doesn't always make smart moves and on rare occasion, very ridiculous moves that would cost the AI the game. I have been beaten by the AI a couple times and in one game, it ended in a draw.

I can't say anything for multiplayer because I haven't tried it yet. The AI is worh playing in a solitare game and preps me for the board game with friends when I haven't played it in a long time. This game is worth buying for both new and experienced players of the original board game.. Poorly tested and frustrating to play. Maybe it will be stable later, but certainly not yet.. I love this game. The physical one. The issue I have with this version of the game is that it's not at all like playing someone at the same table. You can't see the opponents moves. You can't even be in the game when your turn is done. You get booted back to the main screen at the end of your turn. If you want to play asynch it's fine I guess, but if you want to play someone live as if you're at a virtural table this version of the game is terrible for that. Terrible. Waste of my money.. If you are into playing board games than I think you will like this game. I never played the physical verison of 1775: Rebellion but I imagine this game plays very similiar to it. I have been playing war board games for 20 years and this game is right up my alley So far I have played 3 complete games, 1 American and 2 British, and I feel that I could play many more before the game begins to lose it's replay value.

Games typically take about an hour to complete against normal AI settings, playing the standard long game. I have not yet played the shorter game or the Seige of Quebec. Will probably play those after my current playthrough. I also havn't tried the multiplayer.

I have found a few bugs in the game but nothing that will break the game or ruin your game.