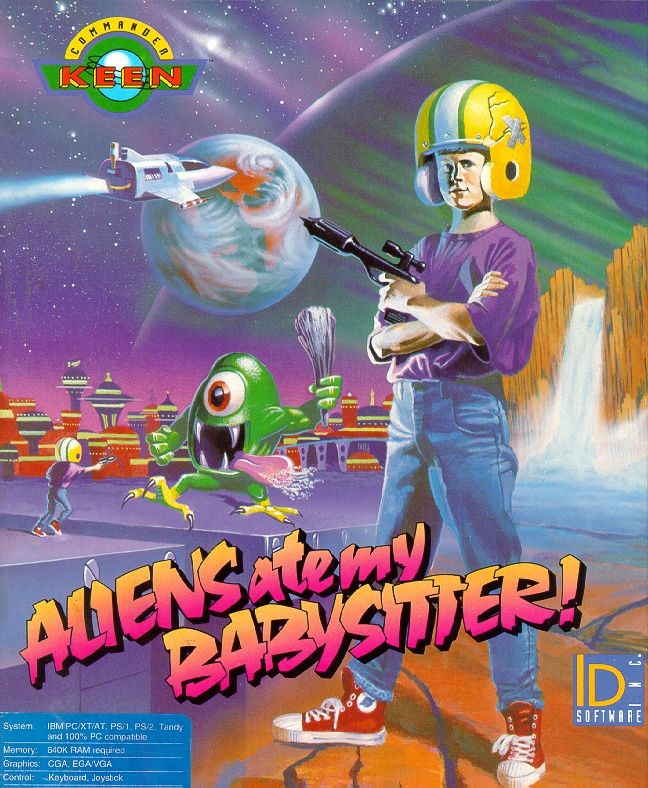 Billy Blaze, working on his wrist computer(which never did get around to featuring other games than Paddle War, in spite of the in-game info screen of episode four said that he'd probably add more), hears his babysitter call him into the house for dinner, to which he replies that he'll be right in. Boy, will he regret not coming right away... because one loud noise and a few moments later, when he rushes to see what happened, he finds no sign of poor Molly other than a note in some scorched grass revealing that the Bloogs of Fribbulus Xax have abducted the teenage girl, and plan to, you guessed it, eat her. The young boy realizes full well that he must go and get her back... sure, she can be strict and annoying, but his parents will *never* believe him about what happened! He immediately dons his trademark football helmet, and, as his heroic, Earth-defending alter ego, Commander Keen, sets out to rescue his babysitter, by going to the planet and searching high and low for her. The game has you exploring all of Fribbulus Xax, with its many vast areas, including futuristic factories, caves and more. The enemies are aliens, the inhabitants of the planet. They are all very diverse and nicely designed, and sufficiently different from those of the other games. Among them, however, are several ones that push you, like in the trilogy. I can't speak for everyone, obviously, but personally, I wasn't particularly happy to see those kinds of creatures again. Granted, the fourth episode had one creature that could push, but these really weren't annoying, and more often than not, they were helpful. Just like the fourth episode(and possibly the fifth, it's been ages since I played it), some areas outside of the levels require you to find items in the levels, and use them to get past certain things(though the fourth really only had one, and then you had to search levels for elders). This, like Keen Dreams, is a one-shot episode, and not part of a series, unlike the first three which were part of the trilogy Invasion of the Vorticons and the fourth and fifth, which were part of Goodbye Galaxy!, though the story does fit in with the rest of the franchise(save for Keen Dreams, which had no real relation to the plot of the rest of the series). The ending hints at more games, which sadly never came, as id Software moved on to more adult games, including Wolfenstein 3D, Quake and Doom, all of which were lucrative titles, getting at least one sequel each, and definitely being worth the effort put into them. The story is perhaps silly, but that really goes for all of the games in the series, and, after all, these are children's games. The ending somewhat makes this feel like a set-up to the next titles, the planned but abandoned trilogy The Universe is Toast!, which does, unfortunately, somewhat inhibit the enjoyment of it. The humor is similarly goofy, and remains cartoony, though it's not too bad for those above the age of seven, either. The controls that were set in stone from four and onwards remain intact, so you can still get Keen to do all the cool, action-y things that he could in the last two games. You can also still go in and out of doors, and there are parts in this where it's put to... interesting use. In addition to the items that you have to collect, this game also features big switches that Keen can flip up or down, on and off, by either jumping down onto them or jump up to hit them from below, with his head(ow... well, I guess that's why he wears the helmet, since it doesn't appear to offer any actual protection from enemy attacks). Like the last two titles, this also offers something to collect, other than points, to gather more extra lives. The game-play is quite entertaining. It adds enough new things, such as enemies that act in ways different from earlier ones(and being otherwise imaginatively designed, of course, including visually), to keep things fresh, without straying so far away from these games(as determined by the fourth episode(which was the first to have the controls, game mechanics and so forth that remain in the fifth as well as this)), so as to alienate(pun intended) any fans. The graphics engine continues to deliver nicely designed foes, environments and such. The level design is really good, and sufficiently diverse. There seemed to be much less hidden stuff, and considerably fewer secrets to uncover in this than in the fourth episode, but that may have just been my, admittedly, *extremely* biased opinion and view. The game has less of a vitally important objective or goal(the life of one person versus innumerably high numbers), offering relief and a welcome change to the player(though it could be argued that Keen Dreams, to a degree, had the same). Don't worry, in spite of the title, the aliens don't actually eat her... just like the Earth doesn't *actually* explode in the second episode, provided of course that you don't pull one of the wrong levers(!). In spite of the hint towards and promise of more games, this is actually a pretty good end to the Commander Keen series and franchise(I am, in this, not including the half a decade old Game Boy Color game released with the character, as the description I've read of it makes it sound like an inferior entry that should be ignored by the real fans of the games). "Leave them wanting more", no? And hey, if absolutely nothing else, we can always hope that Tom Hall, the creator of these games, obtains the rights, and goes and makes more, as he's expressed an intention of doing. A very entertaining and cute action platform title, worth playing for the fans of such. I recommend it to fans of platform, the Commander Keen series and DOS games. 8/10