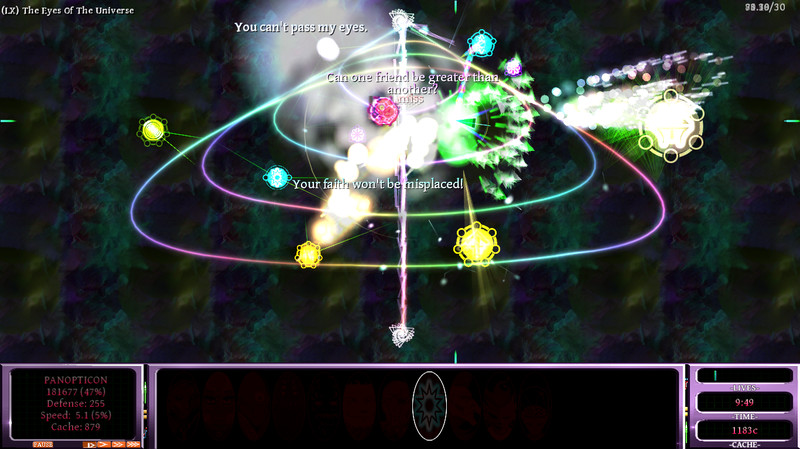 Immortal Defense has been widely praised for the game's storytelling and unique twist on the tower defense genre, many consider it a cult classic of the subgenre. Its story was written by novelist Jeanne Thornton, and its universe is based on the novel Raberata by Robert Bisno. This new Steam release features many improvements over the original release: Steam achievements which grant gameplay bonuses, leaderboards, improved graphics and performance, widescreen support, an improved level editor, and much more.

WARNING: This game involves a lot of flashing lights and visual effects. If you have sensory issues, such as epilepsy, this game might cause more problems for you than other games. There is a way to turn the visual options down, but even with all the options turned down, it can still be quite flashy.

Immortal Defense has a story-driven campaign with 100 core levels and 50 optional side-quest levels (which can be completed for bonuses that help you with the core levels). The game takes about 20 hours to complete everything in. The game comes with the soundtrack, which is by Long Dao and classical composer Walter Eres. There are also Steam Cards which were hand-painted in watercolor just for this Steam release.

There are 26 types of enemies, each with its own abilities and unique interactions with one another, and 11 types of towers, each of which goes through different forms as they are upgraded, and each of which gains new abilities as the player collects achievements. These are not standard enemy types like "flying" or standard tower types like "long range and slow"--you haven't seen these before in other tower defense games. The game also comes with a level editor, with Steam Workshop support, and is pre-packaged with an extra 62 levels created by fans. 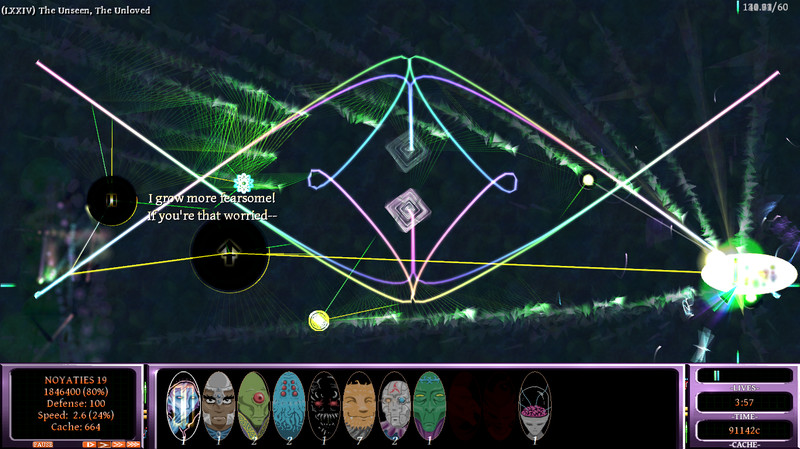 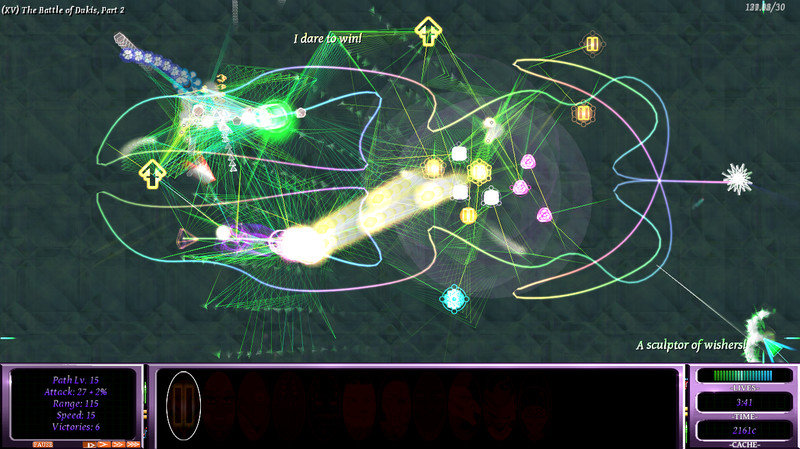 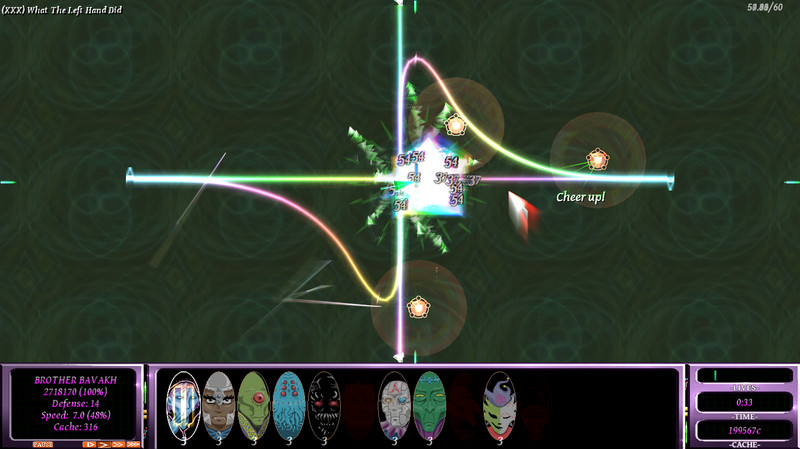 Such an odd game, but in a good way. As a fan of tower defense games, or as this
game calls it pathdefence or pathspace, this is a refreshing one. The towers or
weapons have personality and say things throughout the level. Like most other
tower defense games you gain points, or cache, by killing enemies and use them
to place more towers or upgrade them.

Probably the most important feature of this game is how you kill, or mostly slow
enemies down later in the game, by shooting them with your cursor. It will shoot the enemy closest to your cursor but you can click on specific enemy once to lock on
to it.

Awesome visuals, great characters, dank story. A refreshing twist on tower defense that I recommend.. I bought it out of curiosity but it was a lot more than i had expected.. Immortal Defense<\/i> has become my new all-time favorite tower defense game.<\/b> Why? It's totally original, got a great story (which never happens in this genre), and has a great indie game feel. I will also add that the music is fantastic, and there is a ton of replay value here. At five hours in, I think I'm probably through 15% of the content. I'm not even considering the level editor.

Essentially, the core mechanic is the tried-and-true tower defense system, but there is a layer of abstraction that ties into the story line.<\/i> Trust me that it plays *much* better than it looks in the trailer. Also beware that there is a learning curve to figure out how things work. After reading the detailed notes, you will find there is a bunch of stuff going on under the hood that you wouldn't expect (almost has that 'knowledge is power' thing going like in roguelikes).

Pros:<\/b>
+Totally original take on the tower defense genre - and it's all done remarkably well
+Mouse is the only thing you need
+So much content that it's kind of mind boggling, plus a level editor
+Story is fresh and engaging
+Music is outstanding
+Runs on a toaster
+Part 2 is in the works!!

Cons:<\/b>
-There is a learning curve; for the first hour I was pretty confused (and am totally still learning stuff) so I'd recommend clicking that 'confused' button in the main menu if you are scratching your head

Any fan of tower defense needs this in their library.<\/b>. TL;DR: Immortal Defense is the one of the best, if not the best game in the tower defense genre.

ID is extremely well designed, the towers (called points) are diverse such that each type fills a particular niche, and the gameplay is compelling and challenging. For example, you amass the resources you spend to build points by beating stages. When you start a stage, you can decide the difficulty at which you would like to attempt the stage. Increasing the difficulty makes the stage harder, but also increases the amount of resources you earn by completing the stage. Playing the stage at a lower difficulty is useful for advancing the story and unlocking new abilities. There is no strategic disadvantage to playing stages at a lower difficulty, as you can go back after the fact and replay those stages at a higher difficulty. Rewards that you earn will be retroactively applied to your current resources, if they are higher than your previous high score on that stage.

The game has really interesting visuals, resembling some sort of psychadelic screen saver when all the effects are turned on. The soundtrack is similarly interesting. The background music is mostly a moody and dark orchestral score. The different types of points and enemies have unique sound effects when they interact. The combination of these causes particularly busy stages where you build a lot of points to sound like the product of some mad composer. The story is also compellingly weird, and there were times I found myself motivated to complete stages in order to discover more of the narrative (which trickles in bit by bit at the beginning of each stage).

I don't know if Immortal Defense was a labor of love, but it definitely feels like a lot of time, thought, and effort has been spent on refining it. If you're a fan of the tower defense genre, you'll definitely enjoy Immortal Defense.. Simply put, it is a clicker + tower defense game. I have played most of the first campaign, and there are many more campaigns once you complete. Like others have said it is pretty repetitive; although, there are new unlocks every couple levels to keep it somewhat engaging. I think there is a story... Overall I picked this up because I saw a friend buy it during a sale. It is nothing special but if you can pick up discounted it is definitely worth an hour or so.. I played this game ten years ago, when it was originally released and I thought, this game is unique. I bought again, played and enjoyed it again as a brand new game.

Is so original and the difficulty can be set from too easy to OMFG this is impossible.

I don't understand why this game is not considered a classic.

As another user said this is an art game. Just buy it.. Decently fun tower defence game, story drew me in well enough. Gameplay is quite creative and you're actually involved enough as a player that it doesn't feel like you're waiting inactivly after the towers are placed.

The game does bog down slightly towards the end once you've gotten every variety of tower and most enemies have been introduced, especially noticeable in the very end campaign. The variety of both towers and enemies up until that point kept the game very fresh, it's certainly a game I would recommend giving a go if you have the time, certainly if you're a fan of the genre; It does have the distinction of being the first tower defence game I have actually played for a decent amount of time and finished.

A final mention is that I quite liked how achievements were handled, actually getting something concrete rather than a useless note on your game profile.