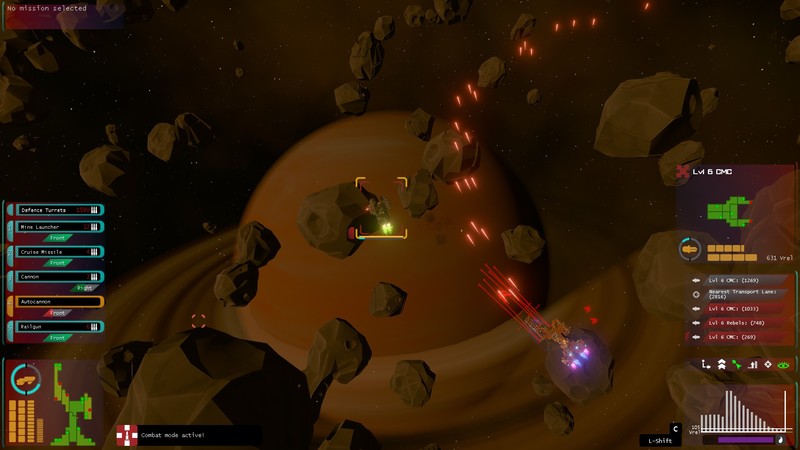 The Landinar Empire has the quadrant on lockdown. Having lost your previous job, you are recruited as a bounty hunter for the Stone Eyed Children. Under their wing you will explore the quadrant, all while having the freedom to build your own spaceship.

Meet diverse characters throughout the Landinar quadrant by docking your ship and exploring stations on foot. As a bounty hunter, you can visit the stations' bounty boards to accept randomly generated bounty missions for credits and rewards. Discover the quadrant, warp from sector to sector and explore stations, hidden areas and secrets at your own pace. You decide where to go next, whether it is continuing the main story or making your own adventure.

Gather hull templates and ship parts to build your own spaceship. What strategy will you choose? Do you prefer speed or gunpower? Build your ship to match your personal playing style at the stations' ship builders and fly off into space in your own custom ship.

Traverse the Landinar sectors and pick your battles. Choose from 10+ weapon types to find your personal strategy and take down your enemies in real time top-down space combat. Hop out of your cockpit mid-combat to repair broken-down rooms with your repair gun, reload your weapons or change your engine boost settings. Board and hack your shut-down enemies for even more rewards.

In Landinar: Into the Void you create your own adventure. You decide what to do, who to talk to, who to fight and how big (or small) your spaceship is going to be! 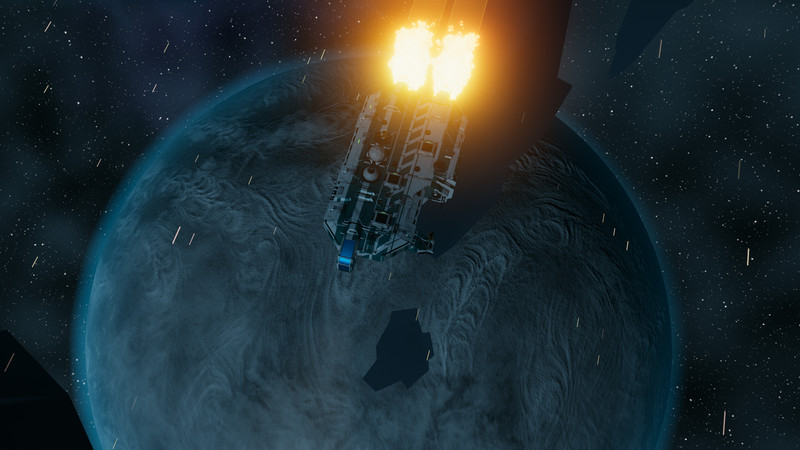 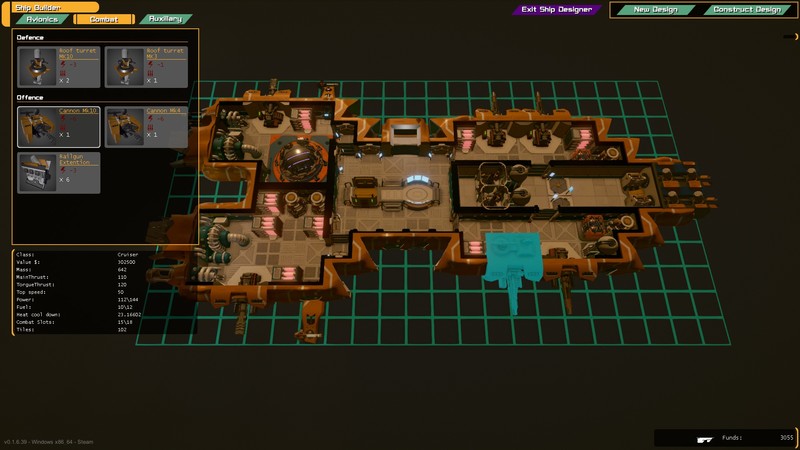 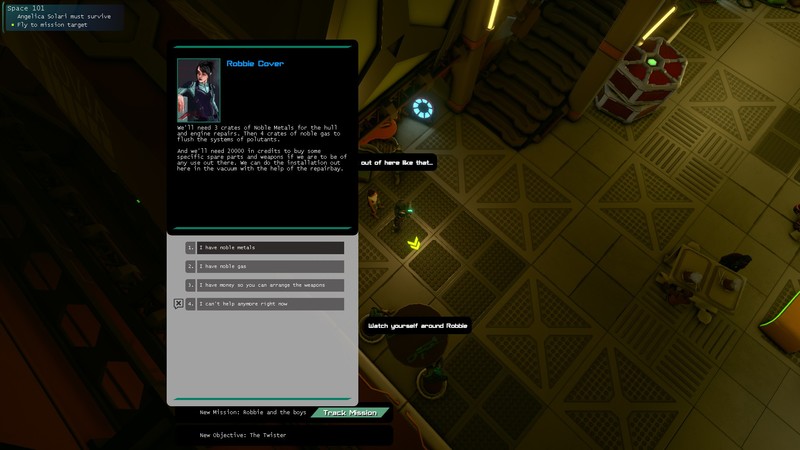 
Was only planning on playing this for 5 minutes to see what it's like four hours later I'm doing this review.

Awesome little game with an almost star control feel to space combat but can board and walk around on ships that you have disabled as well as stations. You get to loot, buy, upgrade, trade and put out fires! Had fun so far and expect to play for sometime to see where the story goes. Couple minor bugs but nothing game breaking.

A few more hours in and have to recommend a no on this one. As the game goes on more and more bug make it unplayable - Quests broken and no work around so end up having to cancel missions wasting time.

Optimization
Really needs to be a major focus. Game slows down and freezes when running around on some stations and when in ship battles when you have more then 3 or 4 ships firing at the same time.


Games play
Become very repetitive very quickly and can break down to fetch quests, kill quests and upgrading your ship. More often you'll go kill some random pirates to make money to upgrade, rinse repeat as some quests you can't start until your ship is upgrade to a particular level to continue.


The story
Not the best or most compelling story it's not bad just not overly memorable. Quest text with NPC seems to have a massive over use of profanity, Perhaps this is down to personal preference but seems over the top and unnecessary.

To some up the game is fun at first but very repetitive after a few hours. Might becomes more playable after bugs smashed, optimization and a bit of polish.. Made me reinstall Freelancer. Budget star citizen. I enjoy the ship craft, but I believe this left early access too early. There are many quests still bugged and some game breaking bugs such as getting stuck and main line quests unable to be completed in some scenarios. Typos galore but that's minor.

Overall I enjoy the game but it is not without problems.. Totaly awesome game, I wait with baited breath for every update. It's super fun and it's only gets better every time they improve it. Buy this and their other game, Convoy, ASAP.. A very enjoyable game, but also very early access.
Some missions are buggy, some don't rly work, not all stations are finished.
The UI doesn't get more basic than this.
And your save files WILL get corrupt after (some) updates.

But dispite all that I already had tons of fun.
The way you can kinda design your ship makes for a fun gameplay.
Especially fun when you get a lil' stronger and those early game ♥♥♥♥ers become mere insect for you to stomp on.
Also some interresting quest that make you take some rough decission.

Yes it's early access but it feels right, and it's already fun.
Surely worth the €10 I payed (had a coupon) but would've gladly payed the regular price after having played it for a while.. If you read no other part of this review, at least read this. Never in my ♥♥♥♥ing life have I ever had a game that fought as much as this one to keep me from playing. I honestly feel like this game, in it's current state, isn't even worth five dollars, not even worth two dollars, but now I'm stuck with this damn game in my library with no way to get my 10 dollars back. Never have I ever had a game make me so angry that I actually want a refund as small as 10 dollars. Yet here we are, don't bother with it's current state and honestly I don't see how people are actually enjoying this game.

If you look at the amount played I've played around 65-71 minuites, this is a lie. I've played roughly maybe 10 minuites total while I've spent the rest in the menues trying to get this game to even work. Fullscreen causes the game, actually being in game, to freeze for me, but the main menu fullscreen is kinda fine. 'Okay fine that's normal' I thought, given that Fallout 4 is finicky when I play fullscreen and Alt-tab and Shadow of War plays better in windowed mode. So? I switched it to windowed mode and got it to kinda work.

The tutorial I played had me go blow up a crate 'okay typical space sim stuff' I thought and did it. Then upon sending out my drone it picked up one crate before flying offscreen and not coming back. I waited for about a minuite but, upon seeing the drone was literally gone and I couldn't progress, I decided to restart only to have the game refuse to let me pick a captian and start another new game.

At this point I started to get upset, but I decided to restart the game and give myself a breather to calm down. Afterall, it's in beta, it's early acess, bugs like this happen, it's fine. Well, I started a new game, about 30 minuites on file cause the game lagged while I was trying to get it from fullscreen to windowed and changing the settings, which also caused the game to act up as well till I got it where I wouldn't lag running around a game that honestly looks like it should be on the Game Cube. Again, early acess, whatever it's fine.

But here's the part where I broke. Upon getting the crates, fighting the pirates, and getting to the repair dock in the second part of the tutorial the tutorial message actually blocked the button I needed to press to proceed. "Alright, I'll just see if I can press a keyboard button to flag the repair bay." nope, you can't "Alright fine I'll adjust the screen size."

This, this is what♥♥♥♥♥♥♥♥me off, cause adjusting the screen size kept the tutorial message OVER THE ♥♥♥♥ING BUTTON THAT NEEDED TO BE PRESSED

I SPENT TWENTY MINUITES, TRYING TO ♥♥♥♥ING CHANGE THE SCREEN RESOLUTION AND IT WOULD BASICALLY KEEP EVERYTHING THE SAME ♥♥♥♥ING SIZE.

Again, I will state for the record I have never played a game that actively felt like it was fighting me to actually play it. I've played better looking games on higher settings, settings my laptop wasn't even able to actually use, with no or minor problems. I have never had so much ♥♥♥♥ing trouble with a game as I have with this one. It's poorly optmisied and honestly there's so much ♥♥♥♥ing oversight and most of the menu really doesn't even look like it does anything, from changing texture size to changing resolution everything literally looks the same, even after clicking accept and waiting five minuites for the game to go blackscreen for another two before finally getting back to the game only to look the exact same.

And yes, I ♥♥♥♥ing TIMED it. I might've spent ten minuites playing this game and the rest I was waiting for the game to actually LET ME ♥♥♥♥ING PLAY IT.

♥♥♥♥ this game. Early acess or no just ♥♥♥♥ this game.. Very good start for a space game ! Ship handling and combat are fun and satisfying. The ability to choose among many ship designs is cool and you can customize all the equipment.
Story missions, but also all the generated bounty missions are a great way to make some $$$ and get a bigger and bigger ship !
It's a good Early Access game and the devs are proving that they are commited.. To me it feels this game is a tuned up asteroid shooter (ship in the middle of the screen, rotate/move & shoot at stuff).

The added elements are
- ship design
- walk around on ships & stations

but that's not enough to distract from the core.

If you keep this in mind, and you like this type of shooter, you'll probably enjoy it.

Also, currently it seems there are quite a few issues still with it, performance degradation being one.. Well,

not a bad game. The running with WASD is nonsense and msut be changed to mouse.
Also the Cam-Farout in Station must be changed and maxed.

Mouse-Mouvement of ship like must of the other games would give the game a real pushup.

AND
OH GOTCH change the music in spae station. That saxophon hurts.... realy, jazz is not everyones taste in SF ..... This is thee Diamond of Gems. It is a must have for second screen gameplay. Pause needs to actually pause the game. Co-op needs to be implemented. I'm going to follow this game to the ends of earth. I wish I could meet the dev and shake his hand. This is exactly what I've been looking for. I would die for permissions to the source code to build off of as a game developer myself. Congrats bud. I absolutely fell in love with all the dynamics you've put in so far and am expecting great updates in the future.