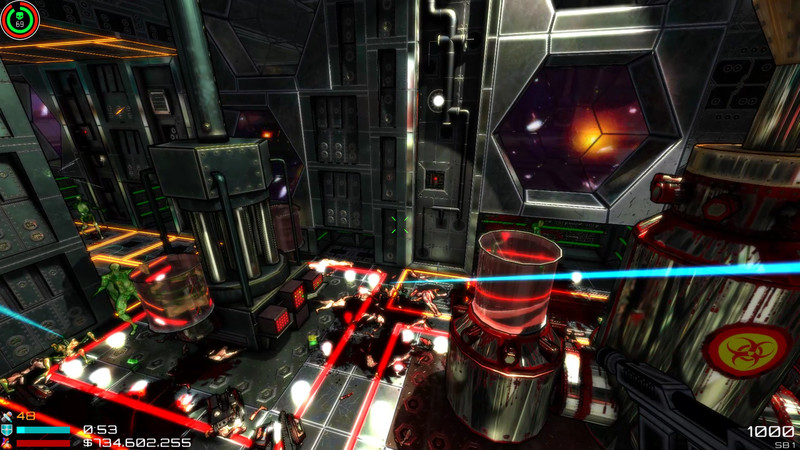 * Playable as a desktop shooter or in VR using the HTC Vive, Oculus Rift and WMR.
* VR mode supports 360 and 180 degree tracking plus step rotation.
* 10,000 maps, ranging from super easy to certain death.
* Play the levels you want, stay on the easy maps or jump to high risk, high reward sectors.
* Collect rewards from completed maps to upgrade a variety of weapons and skills.
* A multitude of different enemies and special map challenges.
* Multiple leaderboards for different game modes.
* Hardcore old-school shooter with rogue-like elements.

An Orcus Research Cartel station orbiting a deep space magnetar has gone rogue. The operating system has killed the crew and turned them into thanatoids, half dead monsters with a lust for murder. And if that's not bad enough, the corporate A.I. back at Earth System has triggered the station's self destruct sequence. Your only chance is to fight your way through an army of weaponized undead and find an escape pod, before time runs out or the thanatoids overwhelm you.

10,000 levels of chaotic science fiction horror that rise inexorably in difficulty. Choose which maps you play, in any order, from the dead easy beginning sectors to the certain death end sectors. Take on extra challenges for big rewards, and use those rewards to buy new weapons and survival skills. The maps start small and painless, but sector by sector the challenge mercilessly ramps up, until at some point they become practically impossible. Where that point is depends on your skill.

Find the escape pods to complete the game, or just keep going and see how far you can get. Rise up on the leaderboards. 6d5b4406ea 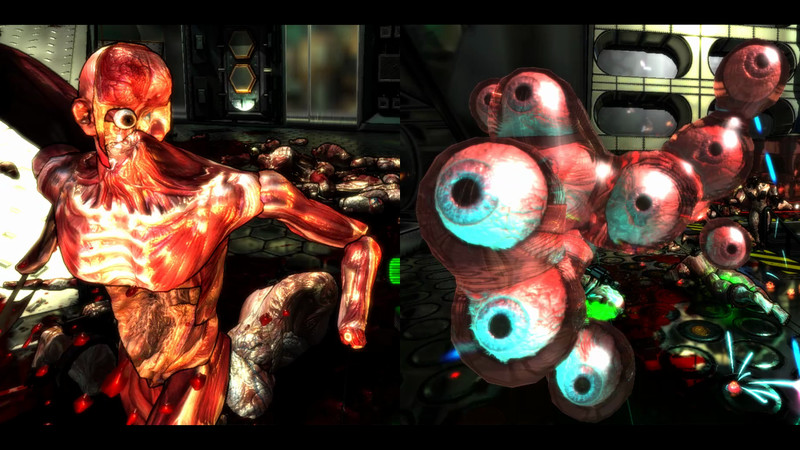 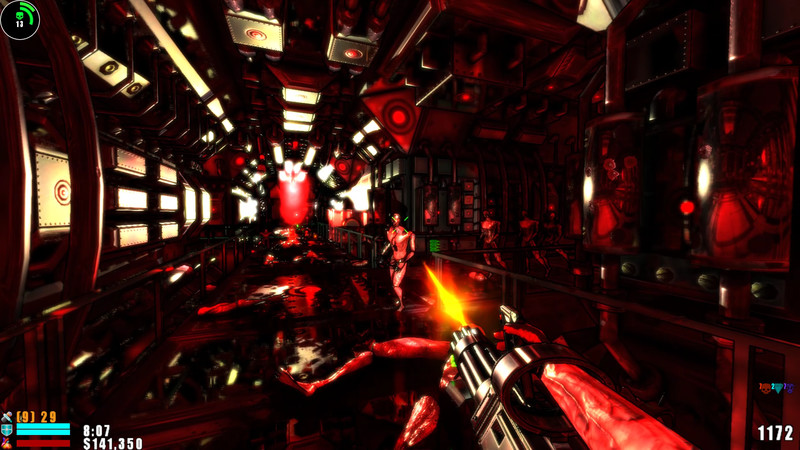 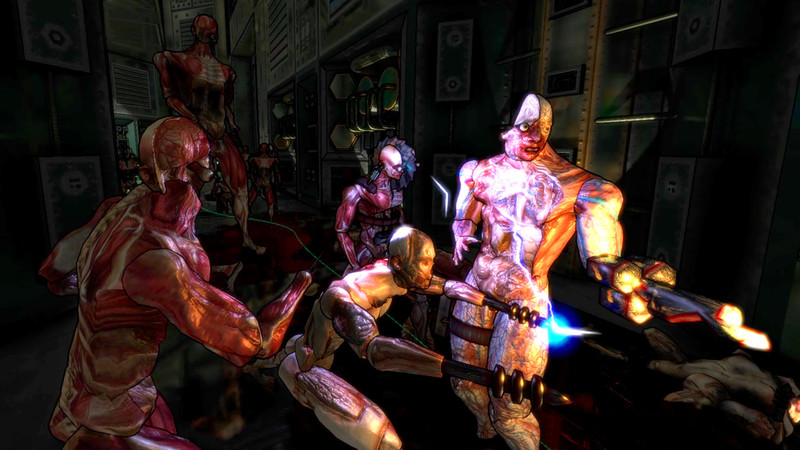 I played this and ill tell you, its ugly. not only that, but the upgrades, difficulty progression, ect. are all money based - you can complete a level, earn a rediculous amount of money, get a bagillion upgrades. top it all off, the levels are monotonous. there is some variation due to the random generation aspect, but it's all different blocks that look the same.

my big gripe is this flat out is not fun. it takes all of the fun things about classic shooters and strips all the fun out of it. If you play doom, quake, duke nukem, ect. there is a real sense of progression and fun while the difficulty ramps up organically. sure, there are switch hunts and such and its basically kill the think, pull the switch, get the keycard, but its fun.

this is literally a squiggly line from point a to point b with hideous graphics and monsters that more or less amount to bullet sponge or shooter monsters and then mindless hordes. it's pretty basic.

I'm not sure what i expected, but i'm disappointed for $15 dollars.

i mean no slight to the game creator, but some serious polish on graphical fidelity, linear level designs, and upgrades would be really a wise decision to make this project great. I love "unloved" and "binding of isaac" which are horror blood and shooting games with upgrades and action, and they have a special charm.


Update 1.3.0. New End Game Maps.:
As the player goes to higher and higher sectors, Necro Mutex is supposed to gradually become impossible. Unfortunately, user Kiddster didn't get the memo, and with a skillful and well honed playstyle has been thrashing tougher and tougher sectors without problem, recently beating sector 9998, the second last sector and the last "normal" sector. (Meaning, not an escape pod sector)

So to toughen up those final sectors, update 1.3.0 has made some changes.

Sectors 9000-9998 have been completely re-done, and now always have a shuggoid, cortex guardians, and the No Ammo challenge. That should make them more consistently difficulty.

The Electro Flamer Alt Fire has been modified. It now takes 0.25 seconds to power down, using ammo while it does. This doesn't make much difference when it's used in a continuous burst. However the "Tap 'n' Zap" strategy of just doing quick bursts now uses a bit more ammo, so it's more difficult to just charge through a sector occasionally tapping the alt fire to clear a path. "Tap 'n' Zap" is still useful, it just can't be used quite as much, especially on low ammo sectors.

Shuggoids and Cortex Guardians have gotten a hit point buff in earlier game sectors. They start out roughly four times tougher than they used to be, though in the upper sectors they still have the same hit points.

This update also includes a number of other minor tweaks and bug fixes. If any new bugs have been introduced, let me know in the discussion forum and I'll fix them asap.

Hope you enjoy the new update.

New Maps.
All the maps from sectors 0000 to 1999 have been redone, with the emphasis on getting more map variation and more thanatoid monsters into the game sooner. Also, Cortex Guardian sectors are now worth x5 instead of x2.

New Options.
Several new game options have been added so the player can customize the game to their liking. These include the ability to get rid of teleporter limits and time limits, and to make giant thanatoids smaller or even get rid of them completely.

One of the biggest changes is that now players can choose to start a game buffed up with credits and skills, instead of starting with nothing. How much you start with is up to you, start with just a million dollars, or start with everything!

Virtual Reality 180 Degree Tracking.
Necro Mutex now supports 180 degree tracking as well as 360 degree tracking, via an option for different Rotation controls. Rotation is done simply by pointing the "run hand" in the direction you wish to face, and pulling the trigger.. Steam has fixed the VR controller issue.:
There had been an issue introduced by a buggy steamworks update that broke VR last weekend, buttons on the controllers weren't responding.

Steam support has now fixed the issue, so Necro Mutex is good to go in VR again! Now you can try out the new 180 degree tracking and rotation. ;). Version 1.1.2 Map Update.:
Since people are spending more time in the sub-1000 sector maps than I had expected, I've decided to redo most of those maps to make them more interesting.

Originally the maps below sector 500 were just made from 2 rooms, which makes them quite easy but also means they lack the variety that later maps have.

Now the sectors from 0 to 999 range from the original 2 rooms up to 3, 4 and 5 rooms, which allows for more diversity in map architecture. Also means that they're a bit trickier, but they're worth more reward too, and with the changes made in the 1.1.0 update players shouldn't find them too difficult.

The alt fire shocker attack from the flamer has been promoted to its own weapon, the Electrogun. It ranks above the rocket launcher in terms of price. Its alt fire is a concentrated long range arc of electricity, a handy complement to the short range area effect of the primary fire.

The Flamer has a new alt mode, blasting a rapid fire stream of incendiary grenades. Great for taking out bigger targets or clearing areas that you can't see, just bounce some grenades in.

1.3.2 also has a number of bug fixes for issues that were introduced in 1.3.0, the two main ones being the leaderboard sometimes not updating, and some code that wrongly saw the new maps as sign of an error.

Hope you enjoy the new gun, and let me know on the discussion page if any more bugs show up.. March 28th Promotional Sale. 34% off for a limited time.:
To celebrate the additions made in the 1.3 updates, Necro Mutex will be discounted 34% for two weeks, starting March 28, 2019 10:00am. (US Pacific Time.)

If you were waiting to blast some weaponized undead into blood and bone slurry, now's your chance!