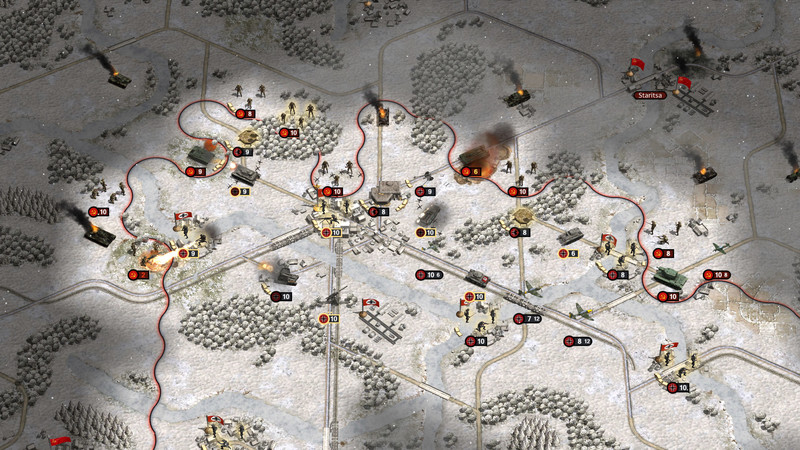 After two years of lightning victories all across northern Europe, the German army has suffered its first major setback in the war. The great offensive to the east - the invasion of the Soviet Union - has stalled right in front of the gates of Moscow.

Following the relentless defense of their capital city, the Soviets have launched several major counter-attacks during the harsh winter of 1941. German forces are forced to retreat and regroup, but must maintain their position in reach of Moscow. Once the Soviet attacks have been broken and the strength of the Panzer Divisions is replenished the offensive will resume - until total victory has been achieved.

Panzerkrieg, the new expansion for Order of Battle - WW2 forms the second part of the German Grand Campaign, following the previously released Blitzkrieg DLC. Players can start the Panzerkrieg campaign from scratch, or import their core force from the end of the Blitzkrieg campaign - including all the previously unlocked commanders and specializations. The campaign focuses exclusively on the Eastern Front, including iconic battles such as the Siege of Sevastopol, the devastating urban warfare at Stalingrad and the epic clash of armour at the battle of Kursk.

• 40+ new units, including Tiger and Panther tanks, Ferdinand tank-destroyers and Wurfrahmen motorized rocket launchers, while the Luftwaffe has been reinforced with new aircraft such as the Fw 190 series, Me 410 fighter-bombers and Ju 87 G "kanonenvogels".
• Designed to be played as a grand campaign, following the Blitzkrieg campaign and preceding a yet unannounced final chapter in the German European campaign. Core force importing has been improved and expanded to include previously unlocked commanders and specializations.
• A new wet climate type affects the battlefield: units move slower in the mud and dirt roads no longer provide any movement bonuses. 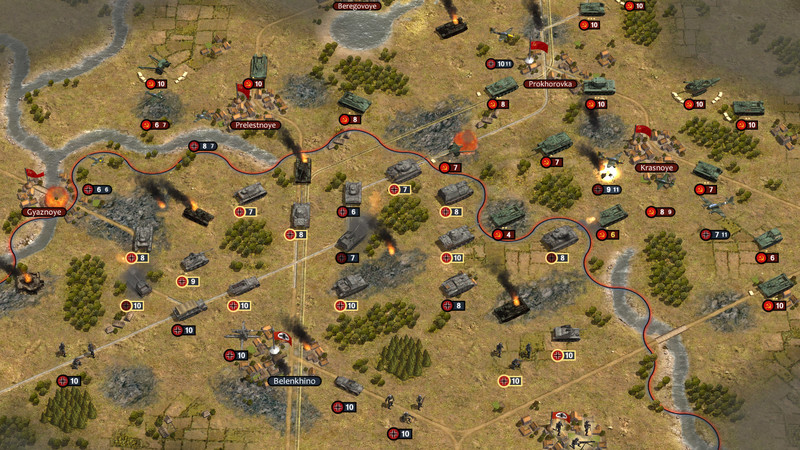 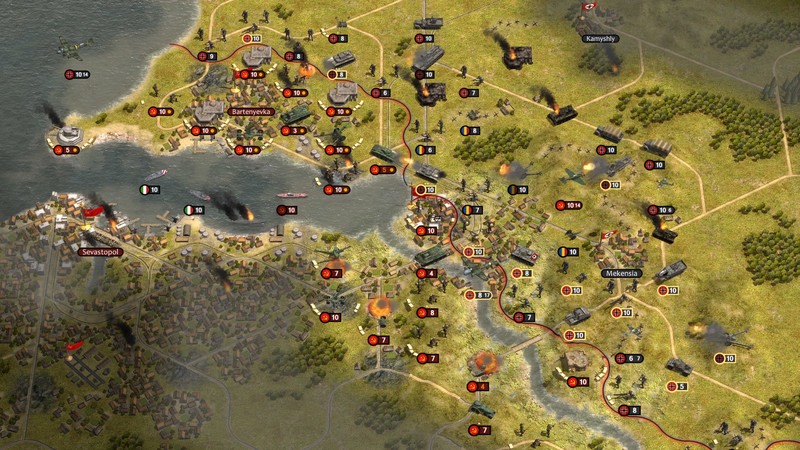 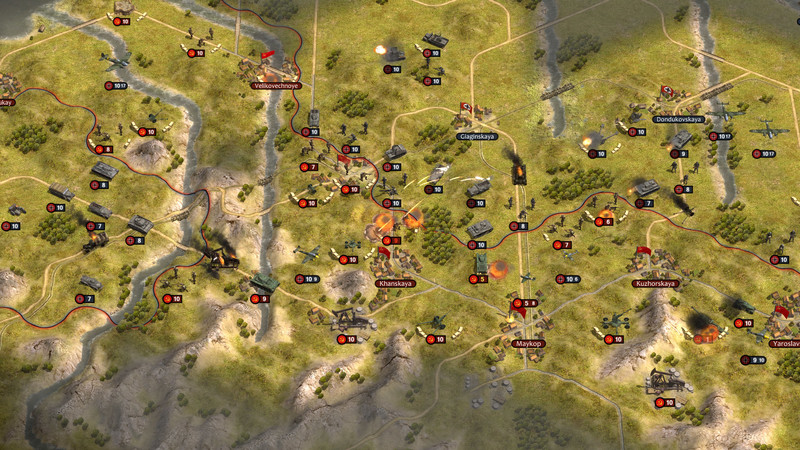 I have Panzerkrieg and Blitzkreig along with Kreigsmarine. I have not tried Kriegsmarine yet, but I have completed Blitzkrieg and Panzerkrieg. The two DLCs work together very well in telling the timeline of the war.

Panzerkrieg is certainly more mature vs. Blitzkreig in that the maps seem to be bigger and the difficulty is much harder once you reach Stalingrad. I'm stuck on the scenario after the Stalingrad Trap scenario and am enjoying trying to figure out good strategy to beat the Soviets. Their air superiority and amount of armor units gets to be quite the challenge at that point.

Regardless of the one neutral comment above, this is highly enjoyable and highly recommended.. So far good. But does anybody no how to incorperate your core units from Blitzkrieg to Panzerkrieg. I thought you coud do that.. I bought this but the DLC is not showing up in my game. Steam says not our issue, contact the game maker.


Took a bit, but all is well again, so I have changed this to a thumbs up. :). Panzerkrieg is a glorious (likely) conclusion to Order of Battle's campaigns in the East between the Germans and Soviets. It's suprisingly varied, difficult, and plain old fun. It's good to know the newest DLC is the stongest to date, as it bodes well for the future. I put in about 35 hours in this DLC. Well worth the cost. Buy it.

The series of campaigns pick up where Blitzkrieg left off, with you at the door of the Kremlin...except the Soviets have counterattacked. The battles focus on this grand back and forth across the steppes, with close ups in Crimea, the Caucasus, Stalingrad, and Kursk.

At the start of the first battle, you realize this will not be like other DLC. You're hardpressed to hold what you have, let alone push forward. Over the first few battles, you're rescusing entire encircled armies (the scale of maps and units is HUGE), and taking phyrric victories. I lost a number of times, trying to figure out the best way to both deploy and use my troops. It's the first DLC where I can recall needing and using a varied force with mobile flak, light transport, anti-tank, and engineers.

The middle battles in the 12-battle campaign see a lot of German success. You're russing to the Don, to the Volga, to the oilfields of the Caucasus. Running tank battles and upgrading your men to having armored transports are the letter of the day. Stukas fly ahead and reduce entrenchment. It's fantastic. The scale of maps and the number of troops on both sides mean you have to choose your advances and where to fortify crossings. The game really shines.

There's a three-battle focus on Stalingrad: first the rapid advance to the outskirts of the city, then a close up on the taking of the city, and finally a fantastic winter battle with encircled German armies holding out. They don't come one after another, and that's another good aspect of the DLC - the devs know when to shift the campaign focus to keep you interested. The battle of take Stalingrad is all you could hope. Weak troop transports are easy pickings for your veteran Stukas, if you can dodge gunboats and AA. Heavy artillery across the Volga wreaks havoc on your advancing armies, so you have to soak it up and hope the Luftwaffe can survive to take them out. Block-by-block fighting around a number of key locations is fully engrossing. Taking the city feels like an accomplishment.

The battle of hold Stalingrad is possibly even better. The Volga's frozen, so your encircled army can only hang tight and fend off Soviet assaults from many sides. Garbage Romanian troops help you hold the line elsehwere as you try to relieve the encircled army. It's a close battle, and I nearly lost on the middle difficulty.

The crowning achievement of the DLC is the final battle centered around the Kursk tank battles. It at first seems like another standard running battle, where the Germans blitz through scattered Soviet garrisons and occasional armies. And then you hit resistance. I don't want to give it away, but suddenly you realize there are 20 Soviet tanks threatening not only your advance, but the whole army. I had hardly any ability to repair my units or heal men due to upgrading to Panthers and other improved tanks. In the end, I eked out victory by having my veteral infantry soak up attacks and let my veteran Stugs bombard the Soviets. But it was close, and I'll hear Katyusha rockets in my nightmares.. How can you finish the secondary goal in the first mission: Rhzev. You have to bring the heavy infantry and stug to the assembly point. I did, no completion.

Can you describe the goal better?