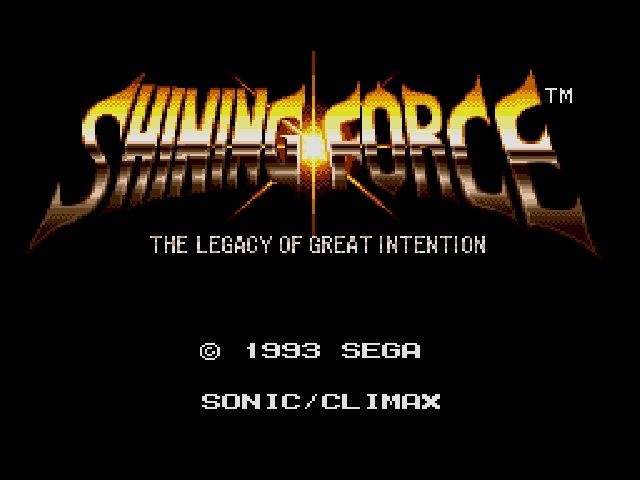 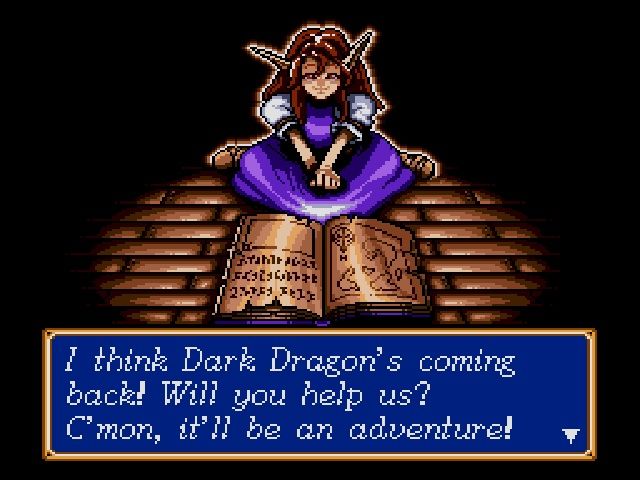 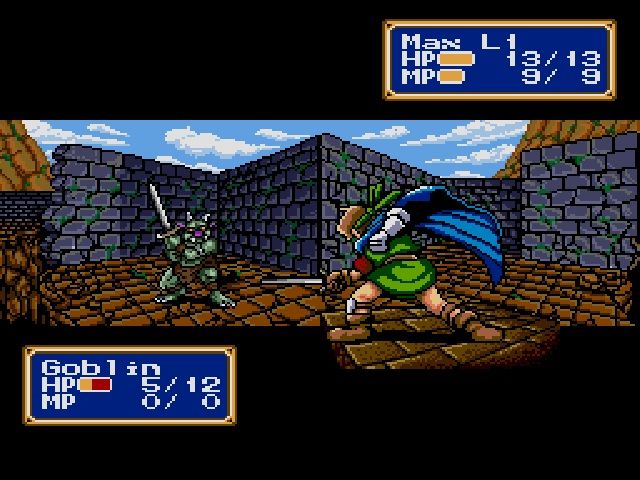 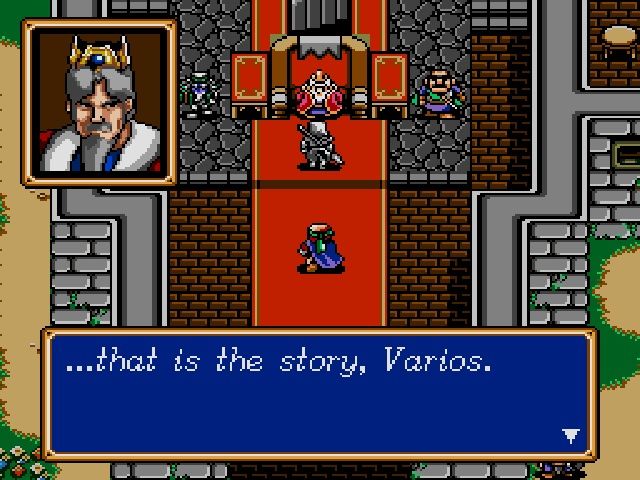 This was one of my first dramatic rpgs on the sega cd, loved the music, couldn't beat it until I cheated with an emulator years later though.. Shining Force is one of the early console Turn-Based Tactical RPGs. The first popular one in the West. It's also much closer to jRPGs than other games of this genre, no permadeath. It's a sorta sequel to Shining in the Darkness, albeit the only common thing is setting and seemingly same baddie with same name who actually isn't is (\u201cDark Sol\u201d was \u201cMephisto\u201d in JP version of SitD). It came out in 1992 in Japan and came to West in 1993. Made by 'Sonic! Co' (later known as Camelot), Climax, Sega of Japan. 12 Megabit ROM, 3 save slots.

The game that you have here is nothing more than emulation of Sega Genesis version.


Now, technical part about Sega's emulation here:
The Sega Classic games that you purchase on Steam count as DLCs for "Sega Mega Drive & Genesis Classics" game that should appear in your library.
It has Bedroom HUB which is the one with many features yet lags for many and Simply Launcher which lacks Workshop and Online but at least it works just fine for everybody.
However, Simple Launcher has it's fair share of glitches as well. It can crash. And it does the second time you go to main menu, so always quit after saving there so it doesn't crash when you want to save next time!
Emulation itself, mostly sound, isn't that good but it does it's job. Also, yes, emulator supports quick saves.
As alternative, you can use external emulator to run games that you purchased. Sega kindly placed in all games that you purchased in "uncompressed ROMs" folder that program itself doesn't use, just change file extension to ".bin" or so. The file for this one being "SHININGF_U.68K".
I also demand you to read digital manual of this game first. You can find it here on store page or go to "manuals" folder of game root and open "SHININGF_U.68K".

Albeit I still recommend you to find original US manual to see the stats of weapons. Because in-game you have to buy them first.

And yep, this game includes saving. In-game saving, not emulator one. Bedroom HUB works fine but Simple Launcher one is buggy:
You have to remember, you have to close emulator in proper way, otherwise it will not have them actually saved in files. That means that you have to avoid crashing it or closing in different way.
Even more, if you load emulator-side saves, the emulator will not see in-game saves and will not be able to do in-game saves either. Even if it makes look as if it does.


Yep, plot is all usual light vs darkness for all ages. With occasional dark moment. Chapter 2 was awesome. But eh, it's a linear game where you can't go back to previous chapter locations and it felt a lot like you was thrown around with whatever objective developers came up with next.

And translation from Japan isn't pretty either. They have cut some details, for example dwarf in the bar isn't drunk, he just wants to tell you an amazing story. And they even completely removed Max's backstory. 'Max' is default name of main hero, you can input your own.

So, it's up to you to lead the Shining Force. And fight enemies over the grid battlefield, being a SRPG game. And the one that people remember as their first SRPG. Sure, there was Fire Emblem on NES, but it never came to the West. And there was Langrissen, the first game of which came to the West on Sega Genesis as Warsong. No idea why that one didn't catch on.

Shining Force is actually unlike other SRPGs. This one went \u201cwhat if we took jRPG and added strategy\u201d. As a result, focus and audience for this game is quite different. You control up to 12 heroes. The turn order of units is impacted by their speed stat. No complex mechanics or rock-paper-scrissors. No counter-attacks. The only non-stat thing is that terrain impacts movement range for each race differently. Terrain also has land effect of lessening damage. It's all just range and movement. And yet game with such simple system quite addictive to play through, most likely due to pacing. Aside from big outdoor maps with mountains.

There is no game over. You lose the battle if main hero dies and even then you just get sent to the last visited friar, keeping experience. The only punishment is losing half of gold and barely has any impact. There is no permadeath for heroes. If they die in battle you can raise them in towns by 'donating' small sum to friar. One can say that it makes game too easy. But on another side, it means that you will fight the battle until the end instead or rage-reloading.

And yep, you get to do usual jRPGs town exploration between some battles. There are shops, people to poke at, you may find new members for the Force. It feels jolly, but nothing special. I just wish graphics in overhead parts of game weren't so shamefully basic. But hey, at least during battles when character is doing an action the game shows a nicely animated cinematic scene each time, they are awesome. I can see where most Megabits of ROM went.
Thankfully, it doesn't have too much micromanagement, as the only equipment you get are weapons and rings. The only pain is 4 slots of inventory and town chest items always going to main hero only.
Protip: Rings and some of the later weapons have special magical power if used directly as item. They must be equipable by char, but don't have to be equiped.
Protip: Some of the cursed items are worthy tradeoffs.

The game is a bit unbalanced when it comes to leveling. Most classes level up easily and fast, while healers are the one that got a short stick. The usage of heal magic just gives a not enough XP. Thankfully, as long as you smartly let your low-level characters to give a kill-hit to the enemy, you don't really have to grind. Another unbalance is that some characters join way too underleveled. And yea, if you abandon some chars they will become very hard to level as you can't go back to previous battles. But don't be afraid, switch or pick how you feel.
Protip: Level main hero with killing blows. You want him to be strong for end-game.

Enemy AI is derp. Often has upper hand in situation yet it acts incredibly dumb. Their priority of attack is quite predictable. Futhermore, their range when they decide to attack varies. There are times when not only they are cool with you bunching up the Force around them, ready to rush them down. Or abused by the ranged attack, not moving one inch despite being melee monsters. And sometimes they aren't dumb much to your surprise. Unpredictable experience indeed.

Oh, and there is promotion. You can level character up to around level 20 and then you get no futher stats. And you can promote character starting with level 10, which resets level, losing 1\/4 of all their stats but they will get even more powerful as they level up and are able to use best weapons. So you want to promote at level 20 for max stats, but if you aren't grinding, then you aren't going to reach maximum stats by the end of game, so you can promote before that. I suggest promoting mages, healers and hero. But not at same time.
Stats you get on level up is randomized. The game does have a rubberband effect there if it sees too much stats imbalance.
Protip: Leave perma-stat-boost items for post-promotion.

Music is alright. Gets repetitive. At least the only track for character attack has a charm. And artsyle is one of the best fusions of western and japanese styles!
And you can also change speed of battle messages (go for 4), disable them and to save game mid-battle in menu during battle when nothing is selected.

Overall, highly recommendable game to both people who want to try out console SRPG, to jRPG fans who want strategy elements and to those who want to play SRPGs with more 'casual' side.. YES THIS GAME IS AMAZING. I've beaten it like 3 times, it is just so much fun! For an old school game they really really did an amazing job on this one. The story was just amazing.. Omg guys, my childhood right here, you need this game, best classic rpg EVAR. Classic Genesis RPG, worth the 3 bucks on its own easily. But also consider the classic pack 4, there is a lot of games of value in that little pack as well. Either way, pick up this game if you like strategy rpgs. If you have played Final Fantasy Tactics, this is kind of along the roots of where that developed from.. Good solid title in the old skool style, only really let down by the poor inventory management system.. This has been my favorite game since I was 7 It's a turn base strategy game where you and your enemmy have a selected ammount of troops. In battle they level up. Theres a pretty decent story to it and the graphics are classic. Over all lets just say Ive played it like twenty times and its remake for the game boy advance about ten times.