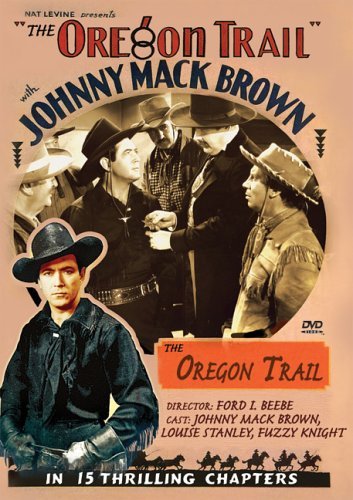 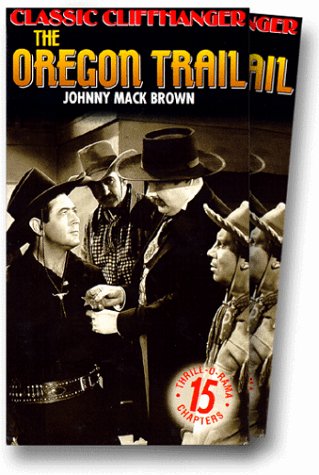 Wagon trains are not making it to Oregon and Jeff Scott has been sent to investigate. Morgan, the representitive of an eastern syndicate, controls the fur trade and does not want the area settled. So he sends his men lead by Bull Bragg to stop the latest wagon train. Scott is quickly on to Bragg and repeatedly captures him only to have him escape before he can reveal whom is responsible for the attacks.
The Oregon Trail was the last of four serials that Johnny Mack Brown made for Universal in the 30's before moving exclusively to features. This 15 chapter saga details the trials and tribulations of a wagon trail headed west to the promised land in Oregon.

There are large scale Indian attacks, the cavalry riding to the rescue and the usual hair-raising escapes to entertain the avid serial lover. As in most Universal serials, liberal use is made of stock footage from the silent era.

Once again, Brown is cast as the dressed all in black hero who leads the wagon train. Fuzzy Knight provides support as Brown's sidekick.

Where the casting breaks down is in the portrayals of the chief villains. James Blaine is barely adequate as "Morgan", the chief baddie, but it is Jack C. Smith as "Bull Bragg" who clearly was not up to the role. Of the villains, Charles Stevens as "Breed" stands out. Either Forrest Taylor, Tom London or Charles King, who play small roles as henchmen, could have elevated this picture by playing the "Morgan" and "Bragg" roles.

If the producers could only have seen a few years into the future, they would have seen that they had the future "King of the Bad Guys", Roy Barcroft (cast curiously as General Custer) in their cast. Ah but hindsight is always 20/20. Glad this was a Serial (Universal Pictures) and not a 60 minute 1930's Western.

Enjoyed each and every 15 chapters. I reckon this is the best of the 5 Western Serials, Johnny Mack Brown appeared in (he only ever appeared in 5 serials). The others are:

In 1934 Johnny Mack got 3rd Bill in Mae West's "Belle of the Nineties" and Fuzzy Knight played one of the Comedians.

'The Oregon Trail' was the next film they both appeared in and was the start of over 30 films with Fuzzy as Johnny's sidekick.

Ford Beebe the Director also directed the Serials 'Flash Gordon', 'The Green Hornet'1940 and 'Buck Rogers'. He also directed all 12 movies in the "Bomba the Jungle Boy' series.