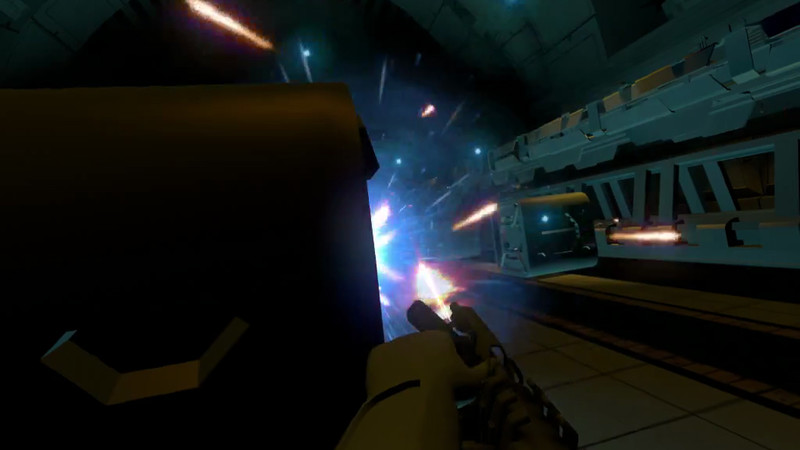 IMPORTANT: XLR is an Early Access game that is still under active development. That means many aspects of it are still rough around the edges, or are just plain missing. We rely on the community model of testing and iterating with our customers, so if you’re looking for a finished product, you should wait for our full release later this year. Seriously, this is a WORK IN PROGRESS.

Most simply put, XLR is a multiplayer team based arena shooter.

In the world of XLR, a future humanity is fighting for its survival as companion AI has become the dominant life form. Some AI have deemed humanity a scourge worth wiping out, while other AI have deemed humanity an endangered species worth preserving and honoring as the AI progenitors. Most remaining human factions have banded together under a new super banner called the Earth Recovery Consortium (ERC) to pool resources and form strike teams for continued survival. Their most frequently pressing objectives are to raid hostile AI-controlled facilities for energy, technology, and supplies. While most of humanity agrees that ERC goals must always be met for continued survival (ERC goals coming soon to matches), invariably every sub-faction has its own side agendas for each mission, in hopes of one day wresting control from the other side of the AIER war.

You’ll party up into factions (with friends, or just join a random match), then land in a drop ship with your strike team at an enemy facility. After selecting a metaframe for your consciencess to intertwine with symbiotically, your team will deploy to various battlegrounds.

Don’t worry, If you need some training, you can always go up against some simulated enemy combatants in singleplayer training mode.

Choose to play as any of 9 player classes:


Many of XLR’s player classes use a slide mechanic for locomotion. We’ve done a lot of experimentation and testing, and we believe we have found a reasonable solution for reducing motion sickness (or even eliminating it completely for many players). Please let us know in the forums what your experience with it is.

We recognize that some players are more prone to motion sickness than others, so we’ve taken steps to ensure that you never have to use the slide locomotion mechanic if you don’t want to. All interactive elements before you enter the combat arena are positioned to fit inside your play area. And during combat, choosing the Zoner class will result in only using teleportation. 7aa9394dea 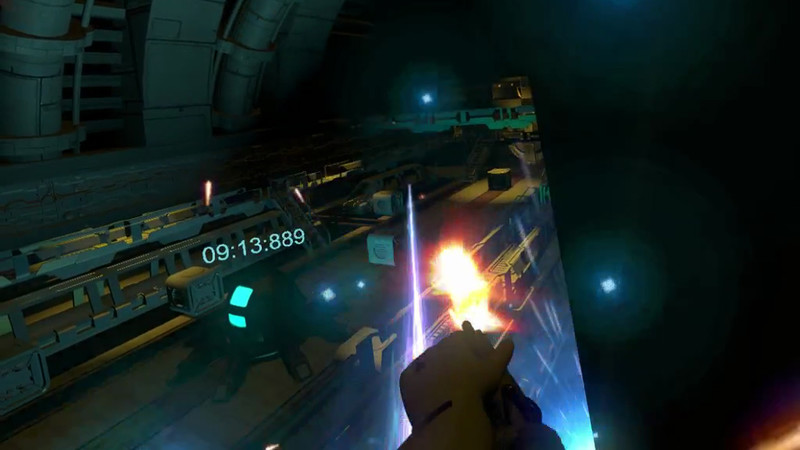 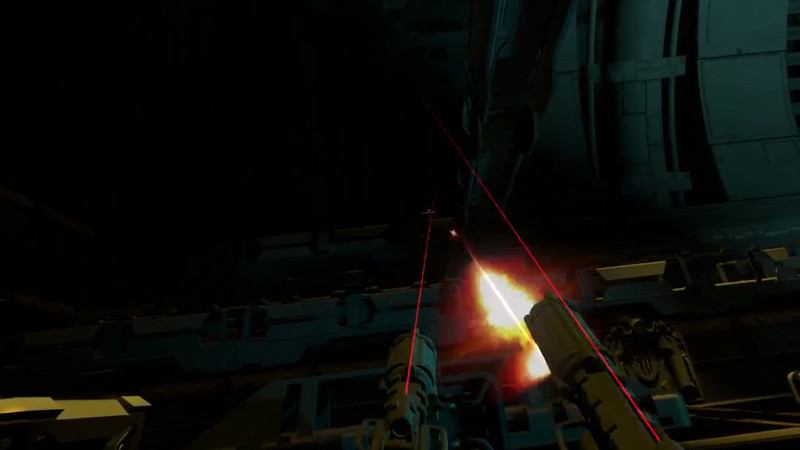 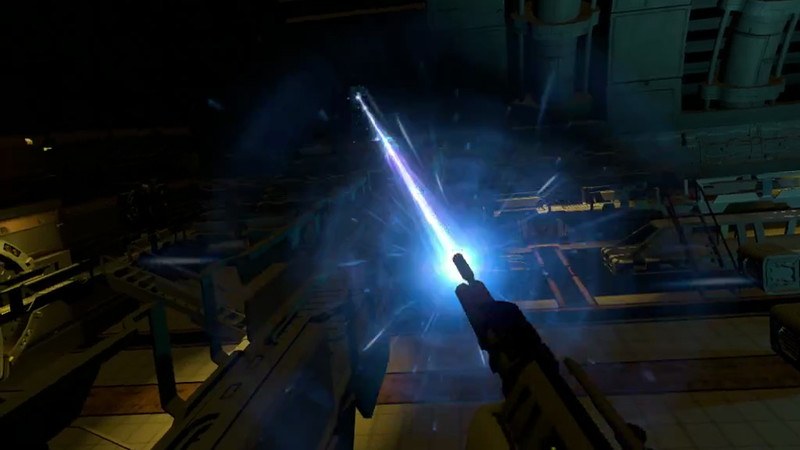 
great tower defence cant wait to see what gets added.. Cancelling this idiots review who got it for free and hated on the dev for needing a VR headset, wtf: http:\/\/steamcommunity.com\/id\/justx2\/recommended\/447100<\/a>

I get my Vive on Monday and I'll give an honest review then. This looks pretty awesome!

Edit: Okay so I might've got trapped in Audioshield for like two weeks but I finally got round to trying this out. It shows heaps of promise with a really solid idea which needs some fleshing out. The teleport through minimap mechanic is awesome. Teleport mechanic needs some polish (an arc instead of a laser point would really help). Player weapons feel very wimpy right now and quite difficult to aim (shots are FAST but still take time to traverse the huge landscape). Walls are a particular pain to build and when you fail the game just stops so there's no way to measure how well you did just yet.

At time of writing, there's a lot of work needs doing so don't buy in without watching a recent video but I've got pretty high hopes for this one.. No updates since august... Well it was cheap but it still feels like a mistake.
There's not much to do ingame in solo other than trying the locomotion methods and testing all the weapons on the small spidey bombs. It gets boring after 20-ish minutes.... BE WARNED!<\/b>

These developers originally appeared here to develop a Minecraft style game called Metaverse. Abruptly, without warning, they abandoned development of that game (after taking in quite a few sales) to develop this game - a game that has nothing at all to do with Metaverse.

To try and mollify their agrrieved customers, they offered us a free copy of XLR (hence, how I'm able to write this review), but are not offering refunds. Metaverse has now gone nearly the entire year without any further update and XLR, as a game, is in a totally different (and, for me, completely uninteresting) genre.

Updated almost never (as you'll be able to see from it's Store News page), and not at all since August. One can only assume they're moving on to yet another game that tickles their short-attention span.

Shonky developers like this should not be allowed to discredit and tarnish the Early Access program, without which a number of quite fine games would never have happened.

BUYING THIS WOULD WASTE YOUR MONEY - IT WILL NOT EVER BE FINISHED.<\/b>. Very shallow, not much content, feels like some short project thrown together. Developer has abandoned the project as well, and multiplayer is dead.. Honestly, this game isnt good. The weapons lag behind your hands so far that it is difficult to be accurate, but with the way guns operate, im not even sure the developer wants you to be accurate. Using the grips to pick up\/drop everything feels sloppy to me, but thats more of a preferance really. The way you open your inventory and teleport is just bad. Text lags behind movement and blur, so if you want to read it you have to be perfectly still.

I wanted to do a Pro\/Con system for this review.... but I honestly cant think of any pros! I've owned the game for a month and I haven't seen a single improvement. Can't recommend this game until MAJOR changes are made.

I get my Vive on Monday and I'll give an honest review then. This looks pretty awesome!

Edit: Okay so I might've got trapped in Audioshield for like two weeks but I finally got round to trying this out. It shows heaps of promise with a really solid idea which needs some fleshing out. The teleport through minimap mechanic is awesome. Teleport mechanic needs some polish (an arc instead of a laser point would really help). Player weapons feel very wimpy right now and quite difficult to aim (shots are FAST but still take time to traverse the huge landscape). Walls are a particular pain to build and when you fail the game just stops so there's no way to measure how well you did just yet.

At time of writing, there's a lot of work needs doing so don't buy in without watching a recent video but I've got pretty high hopes for this one.. After the update, it's a new game. Still WIP now (buggy too) but is going to support lot of features missing in other multiplayer shooters for Vive: a better locomotion (it seems comfortable too), a better weapon management (inspired by H3VR), classess of soldiers, a better graphics.. Note: This is an Early Access review.

I've always been a fan of tower defense games, and have played the crap out of them ever since I discovered them in WC3. As soon as I got my Vive, I made it my mission to check out XLR as soon as I could.

My initial impression was that it was pretty good. It is really a combination of a FPS and a TD, and it combines the two well. The game starts with you in a central command room, and you are given moments to assess your environment in a globe that lets you peer in and out of, before waves of enemies start approaching your location.

You can either start building towers from the overview, or teleport right into the action by twisting your controllers 90% to a side and pulling the trigger. You are equipped with a building tool that lets you drop towers where you are pointing, and also a gun \u2013 something you will almost certainly need to use as the game starts. There is also an option to dual wield, by dropping your controllers to your waste and hitting the grip button to switch between the building tool and your gun \u2013 something I found very satisfying!

Unfortunately, and somewhat understandably so as this is in early access, the gameplay is somewhat flat and there isn\u2019t too much to do beyond trying to survive the waves of enemies. The game can get somewhat strenuous on the eyes thanks to the dark environment and the repeated flashing of flying plasma, from your towers, enemies, and even your own guns. I actually found myself having to remove the HMD when the flashing got a little intense. The sound also tended to be quite repetitive, particularly as you repeatedly spam-firing your gun at the enemies in the distance. When you lose, the game also dumps you back into the main menu rather unceremoniously, without any real indication that you\u2019ve lost.

There is a co-operative aspect to the game that I rather enjoyed, however \u2013 it was pretty satisfying to focus on taking down enemies while your friends focused on building towers and defences around you. It was also pretty cool being able to see your friends out in the field when you\u2019re looking through the overview, and I did retreat to this view when I got a little tired from the repetitive audio and flashing lights.

All in all, the game is pretty flat at the moment. But given that the fact that the game has barely been officially out for a week, I think there is plenty of room to improve, which is why I'm recommending this game. I rather enjoy TD type games, and am pretty excited to see how VR will give us a taste of tower defences \u2013 and so I will definitely be keeping my eye on XLR.