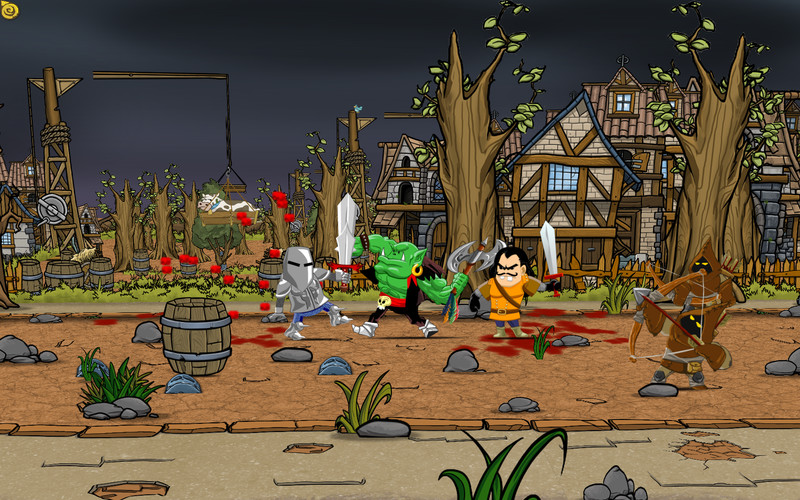 Arson & Plunder is a 2D arcade/beat'em up adventure based on the genre classics of the 90's. The classic gameplay has been brought up to speed with the latest developments and trends! In typical beat'em up style, playing an orc or elf you wade through hordes of enemies out to kill you in "Story mode". You can also build your up-to-4 battle squad to crash them all with your friends in co-op mode.

The game features beautiful 2D visuals, interactive scenarios and a humorous story. Your objective in Arson & Plunder is to survive over 25 different missions in five difficulty levels in "Story mode". While playing you can always switch between being an orc or an elf. This element make the game especially dynamic. The controls are always intuitive and help you to carve your way through an adventure bursting with humor and action. "Co-op mode" will allow you to enjoy all the bizarre situations with your friends. Besides, you can test your endurance in "Endless mode" within a dedicated dungeon scenario, fighting against an increasing cornucopia of enemies!

The orcs and elves of the Loidar wood have been in war since time immemorial. But their
struggles have been forced to a stop because of a new and powerful enemy: Man, a wicked race that wants to take possession of their sacred woodlands in order to exploit all their natural resources. In view of this threat, elves and orcs are forced to agree to a truce and to try stopping the invading forces.

They draw up a plan to stop humans and their deforestation: to find the stationed troops
near wood's region and to beat down their captain. But the region is protected with a magic shield that can't be destroyed by brute force. The only way to get in is to use the Milius stone, a magic stone placed in a cave near the outskirt of the forest, that will transport whoever that touches it to another cave placed near the human region.

This isn't the only problem; orcs and elves agreed to a truce, but they don't rely on the others' abilities for completing the mission successfully. So they decide to send, on their own, a warrior of each race. Elves send Tinargey (Eternal Fire Star) Arson, a graceful and skillful elf woman, well versed in the ancient secret art of Fire Mastery. Orcs sent Vrok Plunder, a rough berserker armed with a big battle axe, as lethal as his arms, legs, jaws and big hard head.

Both warriors get into the cave from two different places, and quickly progress to the magic stone, reaching it at the same time. The stone teleports them to the destination cave, but the result is not as expected: the magic travel wasn't prepared for two beings at the same time, and now the man and the fly the orc and the elf woman are fused.

So, now there is a single body inhabited by two beings, that learns summoning the body of one another as they need.

Once they get used to their new body, they get into the enemy lands, going through a near
deforested wood followed by a village, finding tougher new enemies. After that, they'll go toward the mountains to destroy the sorcerer that shielded their people out of the human territories. Finally, orcs and elves will help our heroes to occupy the castle and finish off the human captain in the highest tower of the palace.

At the end, the wood is safe again, and orcs and elves can continue happily with their bloody wars, but Arson & Plunder™ are still trapped in the same body, and there's no magic powerful enough in the forest able to undo the spell. So, our heroes must leave to a new mission towards the unnamed lands, where it's said that most powerful wizards lives in. 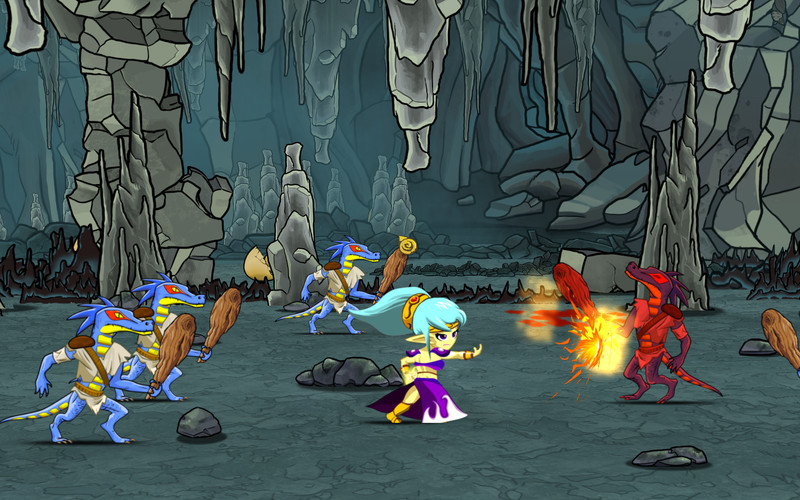 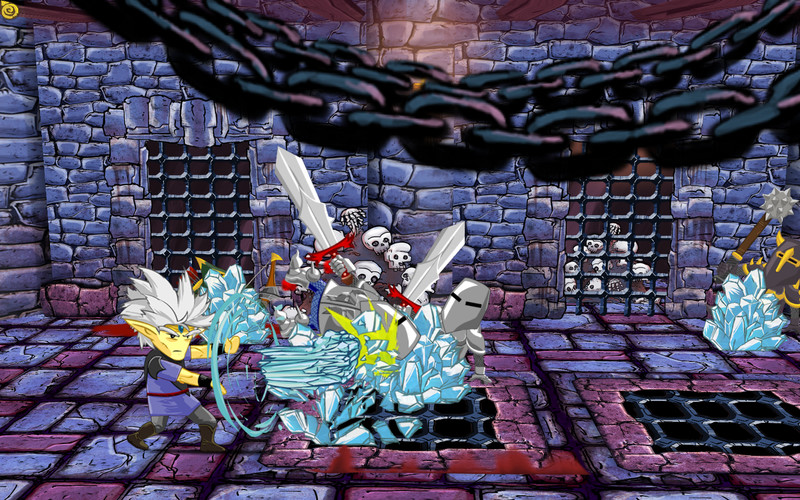 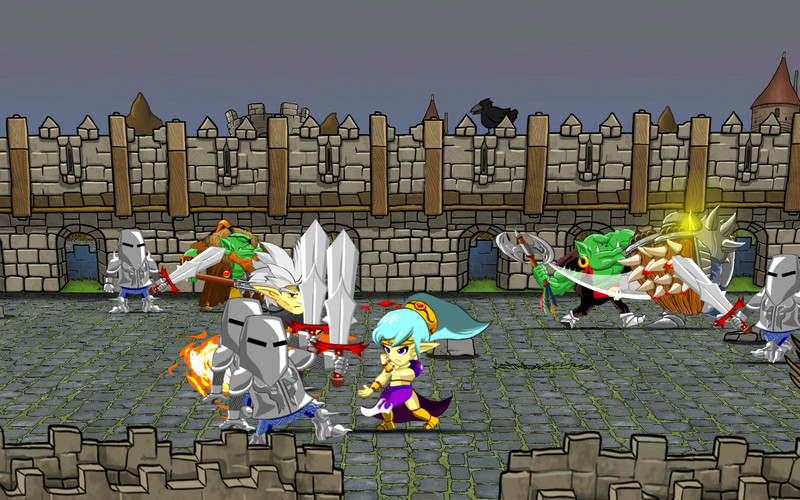 
Mediocre, repetitive gameplay, no thanks. Excuse my bad english (greetings from germany) but I decide to not review in my language.

So, I bought that game, cause the feedback seemed very good, but... it really isn't my kind of game.

Con:
- there isn't really any depht to it... you just mash or using screen-clearing magic... it's like a "Dynasty Warriors 2D Edition" without leveling or other interesting aspects
- classic Beat Em Up? You just walk forward and kill enemys, and at the next level, you walk even further with more of the same enemys, so also no need to jumping
You can just leave the background bland, the level-design is allways the same
- Survival-Mode is more of the same, just without level-progression.


Yeah, I didn't played much of this game, but there was nothing to let me play further.
It's like, I've seen everything in the first five minutes, cause after that, there was nothing special or new.
And there are much better alternatives, so there isn't really a reason for me, to play it an hour.

Sorry, but if you wanna buy the game, watch some YouTube-Video and decide then.
And fantastic music doesn't make an fantastic game... it helps alot, but here, it's just the music and some pretty graphics.

Edit: If you wanna thumb down that review, than say why. :P
So yeah, that is the first game I have, where I think, some friends of the developers praise the game und downvote the downvotes (after the review isn't an hour on steam).

EditEdit: Or paid reviews from some german community, where the review instantly get 30 thumbs up (after maybe 1-2 hours on Steam).. Downgraded version of Golden Axe- exact same playstyle- brawl while you walk. Switch characters. Light on strategy, heavy on action, bland in narrative, although I can see where the developers were trying to be funny. 4\/10 Good for the fans of the walk and brawl genre, though it looks like a flash version of a game.. Arson & Plunder is an action packed fighting game, that reminds me of the old classic "Golden Axe". With his unique artstyle and several gamemodes as "Survival", to name one of those, this game brings fun and nostalgia to your system.

If you wanna remember the old days of gaming in an unique world with love put into details, this game is totally worth it's price

Have fun M3TOXI. Old styled 2d video game. It's almost same as little fighter just with better quality.
Overall rating 7/10.
https://www.youtube.com/watch?v=E-EGYMA6Ons
https://www.youtube.com/watch?v=NYi8EXpozmQ. It plays and feels more like a mobile game. The character animations are stiff and controls are a little bit clunky. But I could live with all that if there weren't for the game breaking bugs. Sometimes the game would simply get stuck on loading screen, or it would stop scrolling to the right even though all the enemies are dead and new ones are not coming. If you want a good action beat 'em up, play Castle Crashers instead.. Im looking negative reviews and 99% of these people didn't play even 30 minutes, and yet they find themselves compatible of writing review.
Such a shame... ok no trolling here ^^

Arson & Plunder is a classic sides scroller 2D beat'em, not that I would called it classic since of beatufil textures and models.
Sound has cool rockish music that wont bother anytime soon.
Gameplay is fun in SP, its easy to start but, each next stage is harder than one before, you will always encounter new enemies and every time more and more of them. Story is also interesting but I wont speak of it (because of potentional spoilers)


Overall;
With everything this game has to offer I can safely recommend this game to everyone, however I suggest buying it on discount. If it hits 50% off I would say it should be instant-buy. Awful game, at first it tempts you with its co-op, without saying clearly that it's only local, battle system at its worst, which is basically a button masher with zero strategy and entertainment. Levels are boring, enemies are boring, bosses are boring, everything is boring. If you want a hack n slash platformer, go for castle crushers or rampage knights instead. Can't help, gfx are ok, but the game itself is simply boring.