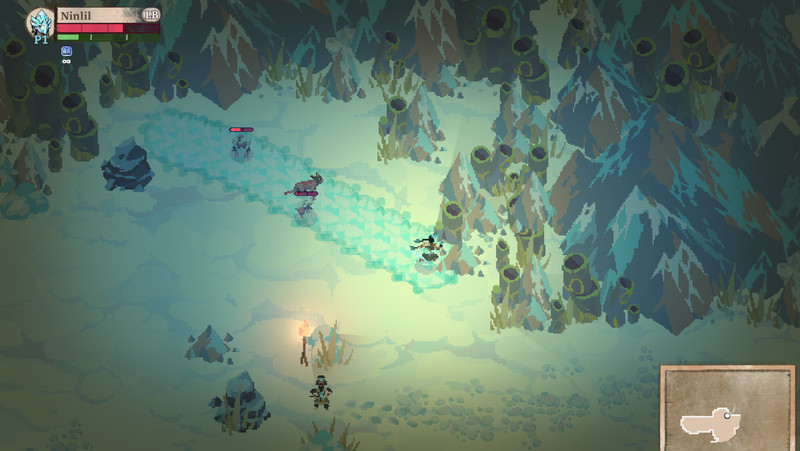 Create your own legend in a 1 to 4 player co-operative personality test! Explore a mystical Mesopotamian-inspired world that's different every time you play.

When the moon does not rise over Issaria, monsters to infest the land and cause chaos. You must set out alone or with the other chosen children of the Moon to solve the mystery and restore balance. You have only 5 days before King Mardokh and the Sun Cultists declare war.

Multiple playthroughs uncover characters, conflicts, and decisions. Each of the five tribes responds differently to the crisis and looks for different qualities in their heroes.

Every action and choice you make contributes to your legend as a constellation in the night sky. Future generations will build upon the mythology you create. How will you be remembered? 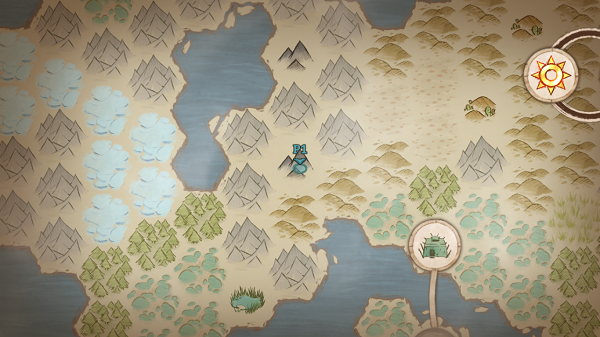 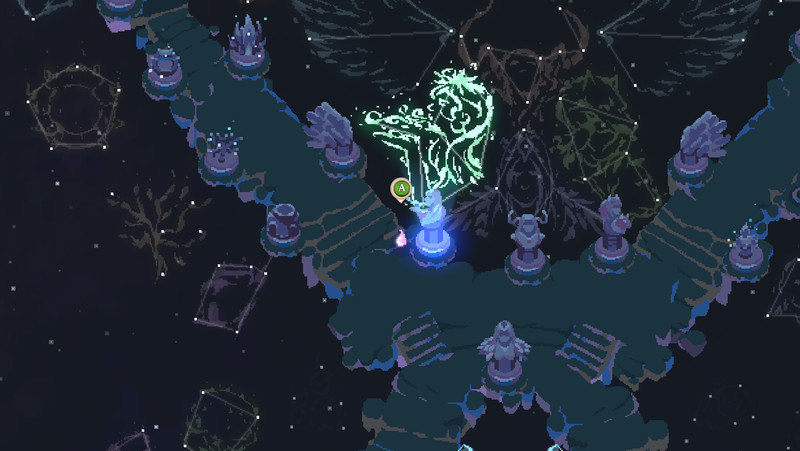 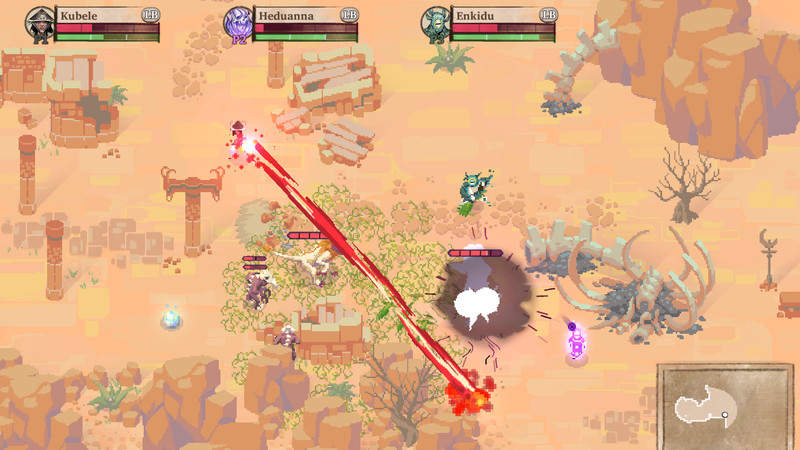 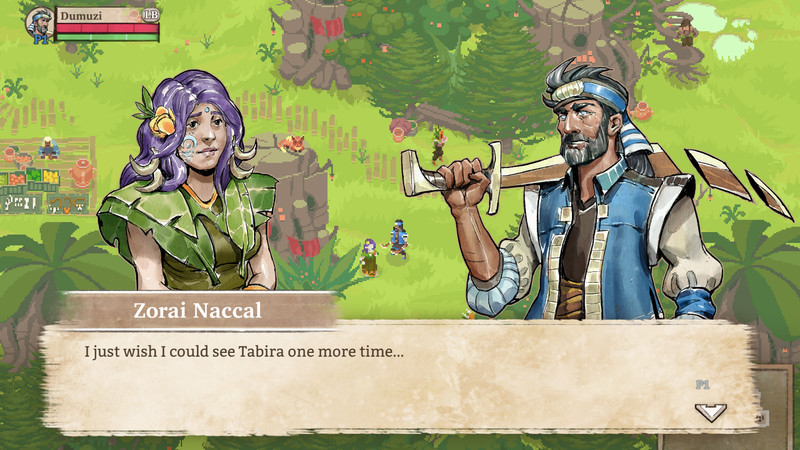 
Let's keep it short, because the game kinda is:
- Great soundtrack
- Short story, but easily repeatable
- multiple (hidden) endings
- "food crafting" more or less
- The voice acting in the cutscenes is great, shame there's not more of it
It's fun if you're the type of person to persue all endings, but it's not worth the buy if you don't.
NOTE: Play it with friends, you'll have more fun, even though the multiplayer is bugged as all hell.. I usually don't write reviews, but I felt Moon hunters surpassed any expectation I had.

It feels like a good old SNES game, with the perfect amount of polish and style.

I've beaten the game many times, and many more to come.. As a concept, Moon Hunters is unique and interesting: a co-op procedualy generated RPG.

Unlike most rogue-likes and rogue-lites, Moon Hunters aspires to find the balance between top-down action combat and multiple-choice dialogue. Choices have light consequences, such as determining the outcome of single (or in rarer cases, chains of) events, but mostly they affect your character atributes and personalities, which, in turn, may enable other interactions or lock you out of a few.

The most interesting aspect, however, is that, after completing a run (spanning something between 30 mintues and 1 hour), your character gets added to the constellations. After unlocking at least 2 or 3 of the possible endings, you'll open the battle arena (and its boss), where you can play as any of your characters who have completed a run.

The problems however are in the presence of minor bugs and, most notably very flawed action segments: characters get stuck in statics and enemies, stutters happen rather often, there are no invincibility frames (leading to you getting stunlocked at times) and some enemies don't have visual queues for their attacks (mainly the ghosts).

While the game itself is rather easy even on hard, these issues mount up in arena, making the 30 waves acchievement a real chore to get.

All in all, I can't recommend this game at full price, unless Kitfox games actually polishes up the main gameplay and iron out a few interaction bugs.. Interesting hack-n-slash. Playing local co-op and experimenting with the different classes is really fun because their attacks are quite unique.

I found the "hook" of the game--that each playthrough tells a different story--very interesting initially... but each playthrough a little less so because you start seeing more and more content from previous playthroughs. It eventually got kinda frustrating because on the one hand it felt like there was a lot of content we hadn't seen, and yet it was not clear what we were doing "wrong" that was making each of our runs so similar. It didn't help that the main puzzle you need to solve to get the best ending feels kinda arbitrary and doesn't tie into the whole storytelling aspect.

All-in-all enjoyable, just frustrating that it doesn't quite live up to its promises.. If you're jonesing for a combat+loot centric dungeon crawler then this isn't going to quench THAT kind of thirst.

This isn't a game that is centered around the combat and leveling up. It is a strong element within it, but the real core is about building the legends & mythos. Your choices are how you build the tales of your character that will be told. It's real easy to miss that this is the meta of the game on your 1st or 2nd play though.

What I liked:
The art style, the music, the character designs, the lore & story

What I didn't like:
Not having long to explore the world before the 'boss fight' (2 more days to run around and meet npc/event would be awesome)

. The game is rough, but the concept is sound and the excution is a good. This is easily one of the favored multiplayer games I play with my friends. I love this as a proof of concept, and I would really like to see a more extensive and polished version.

The game feels like it was designed to be more and the narrative feels like it was meant to be more epic. Though it achieves a choose-your-own-adventure feel in a way that is not achieved by most other games; it has high replayability and it is enjoyable to share with people who have not experienced it before.. At the moment i'm enjoying this game, it is quite tough to complete it perfect but it is a sort of miniadventure arcade style, divided in episodes, (i can see 4 avaiable right now at the beginning) rpg with hack'n'slash combat, programmed to be completed several times in order to unlock more characters, perks, levels ingame to unleash new finals of each character. Not bad at all.. I really wanted to like Moon Hunters.

I applaud the character art and the attempt at mythic storytelling. I appreciate the idea of using various musical themes to create different moods. I enjoy rock-scissors-paper style twitch action. I don't mind pixel art. Some of my favorite games have very minimal graphics. Procedural generation and replayability, especially with new unlocks or a different perspective on a previous scene, are devices that I enjoy in games.

But somehow, all these ingredients that I generally like, all piled together, didn't make a game I particularly enjoyed.

Maybe it's the feeling that disparate elements are taped together, cobbled from three or four different projects, with vastly different production values. The whole thing feels like it was programmed in at least two different development engines, by different game directors.

Take the dialog graphics, for instance. A whole series of well-rendered, hand drawn images pop up for the many brief and cryptic conversations that your character has over the course of his or her five day journey. I really liked the style and the mishmash of different cultures, that could have been clumsy and clashing, but came together for me, creating this idea that the story exists in some universal land of the ancient subconscious. The whole of the story feels like a dream related by moonbeam.

But then you get into the bulk of the game, wandering around in a muted low-res pixel art world that feels like cardboard cut-outs for an elementary school play. The action sequences also feel like the kids table, with goofy, simple sound effects, unidentifiable monsters and long slow explorations of mostly bland procedurally generated locations.

The soundtrack is another disjointed example, with pieces evoking a wide variety of moods. I didn't think they were all bad, but none I wanted to hear again. Worse, one short track would run for an entire long run through one of the zones, grating on my nerves. The vocal tracks, in particular, had a nails-on-chalk-board quality. The different tracks often felt like they belonged in wildly different games.

The whole story of the game is bookended with a tremulous sounding girl who sounds like she's reading into a too-hot microphone in a junior high gym. Music plays over her boring, uninspired narration, making for the opposite of an ear worm. Fortunately, these cinematics are skippable; yet, they tell the major beats of the story.

There are several different characters to play, some unlockable. They feel different from one another, which should be a good thing, except they are wildly unbalanced. The first character I played the game with, and got through to what seems like the end boss, had such awesome crowd control and great range that, unless I was fighting a mini-boss with an unstoppable attack, I just stood still, firing off my crowd control every few seconds, holding down the left mouse button the entire time to blast off my ranged attack: boring.

The game does create a summary of the choices you've made along the way that tells like a pre-historic legend, creating the feeling that there is a depth here, but each time I played, I got the same tedious boss fight at the end. For all the attempts at symbolism and poerty, setting up the ancient world of the unconscious (i.e. the Moon People) versus the rational and modern (i.e. the Sun People), it all seems to go back to an empty, repetitive, under-developed and unattractive pixel art fighting game.

I'm not saying that the developers didn't try or that there aren't some interesting ideas, cool art, and great characters, but they're all paper thin. The center seems to be in exploring the story through repeated playthroughs, to unravel what's really going on. But instead it all feels like the short, odd track of music that belonged in some other game, repeating over and over as I explored yet another bland pixel forest, looping and going nowhere.