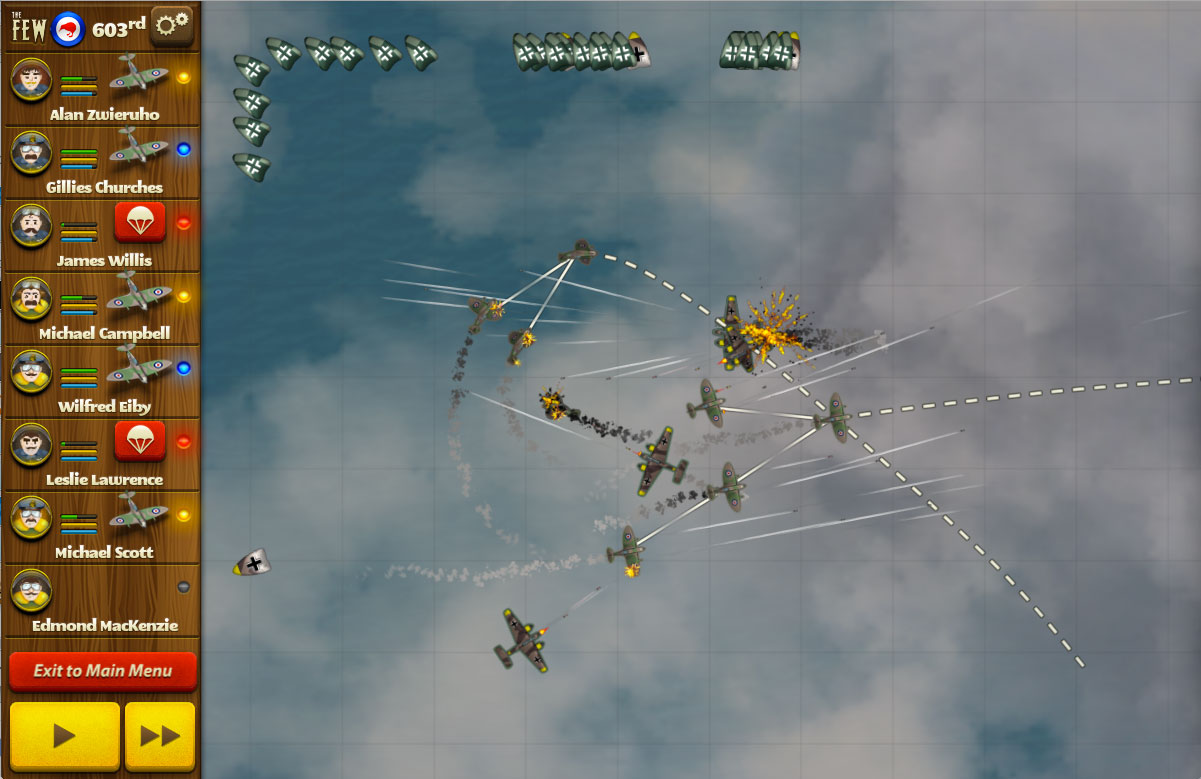 Take command over RAF during the WW2 history turning point, the Battle of Britain!

The goal of the game is to defend Great Britain against German bombing raids.

The game has two distinct gameplay experiences where:
* The player manages war production and squadron placement
* The player organizes patrol routes and tactics

Once combat is initiated the player can lead their squadrons to attack waves of German bombers utilizing simple touch or mouse commands.

The game follows the historical timeline very closely, but at the same time - the game mechanics are easy to learn (yet hard to master) and it provides great entertainment for both seasoned and novice players.

* There are 8 aircraft types in the game - including of course the famous Supermarine Spitfire!
* Every pilot is earning his own experience - witness your rookies become aces!
* Manage the British war machine - decide what should be built and where
* Fight epic air battles!
* Lead English, Polish, Czechs, Canadian and New Zealands squadrons to fight for freedom!

The game implements ‘German Command AI” which results in each campaign playing out differently. No two games will ever be the same. 7ad7b8b382 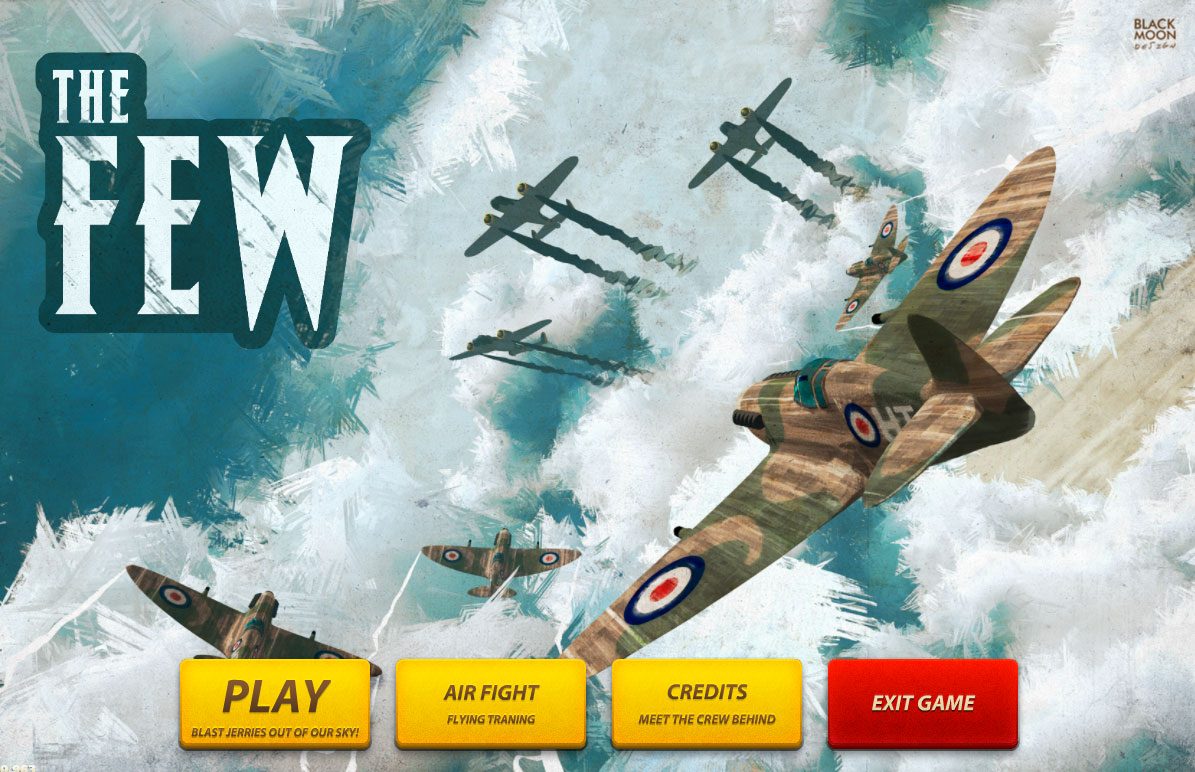 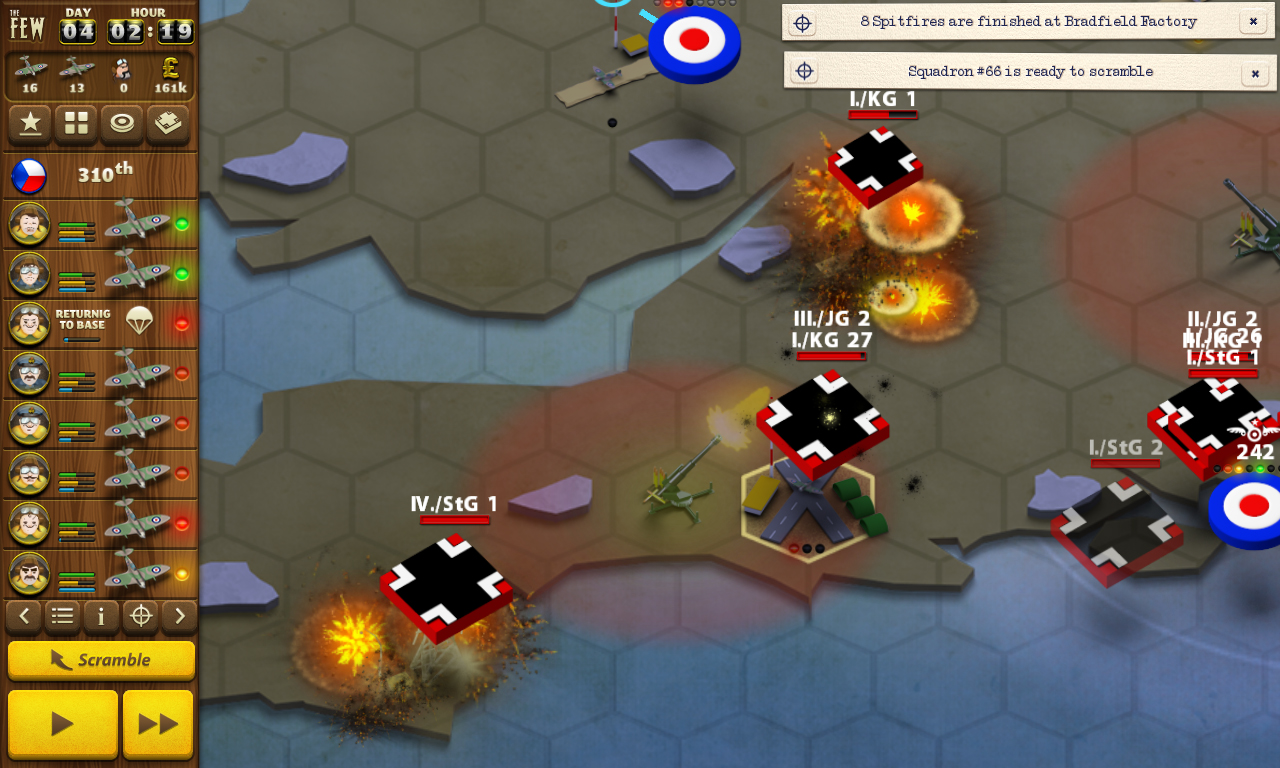 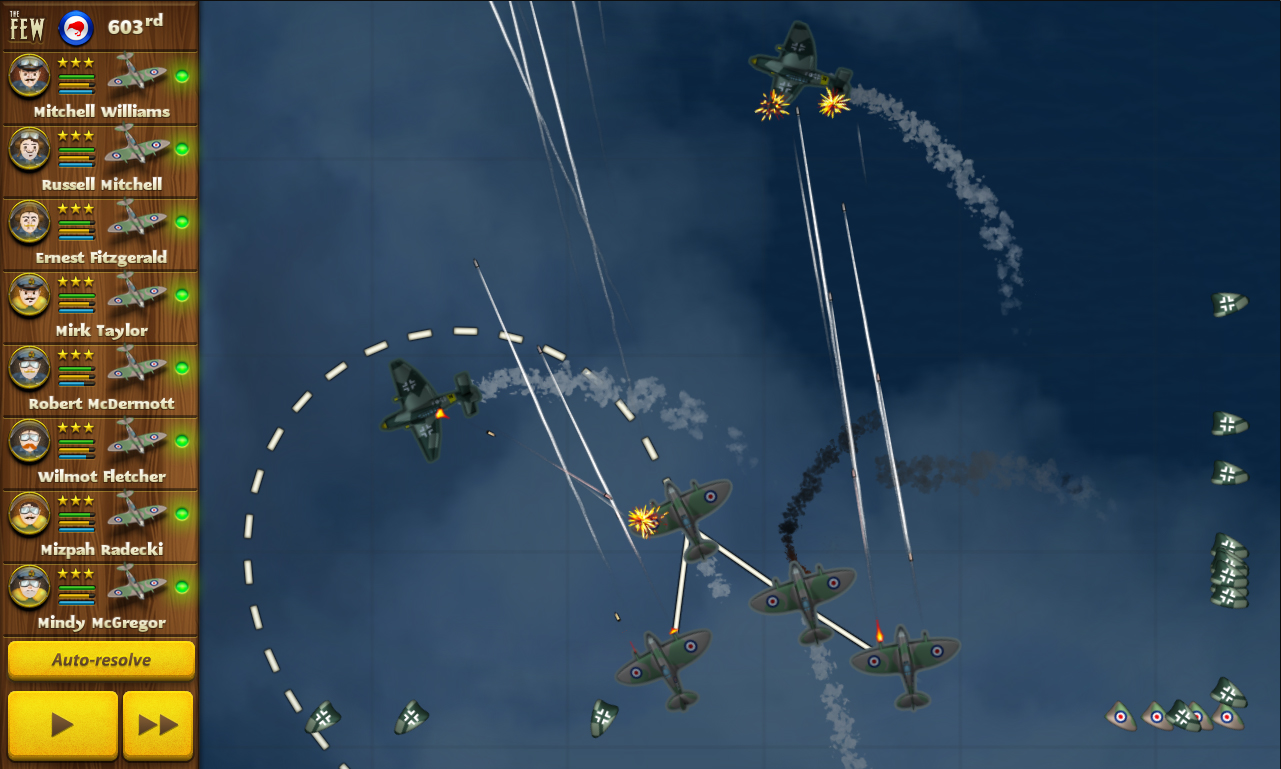 Really enjoying this game so far. Its a simple game to get into but the challenge it provides is what is going to keep me coming back. If you don't know what this game is about, here's a synopsis: You assume the command of the RAF during the Battle of Britain and are in charge of creating, maintaining, and deploying squadrons of Spitfire and Hurricane aircraft to defend airfields, cities, and installations inside of England to halt the Luftwaffe from gaining air dominance.. Rather repetitive. Once you grasp the basics, you find that there's nothing beyond 'basics' at all, but ton of micromanaging the same dogfights.

Would be pretty nice for early access alpha build though.. As it stands I heavily advise AGAINST buying this game for several reasons.

1 - You can lose all of the pilots in a squadron simply because they're too terminally stupid to make the decision to bail out themselves and it's often an impossible task to hit the bail out button the game gives you in the *tiny* window of time available to you to do so while the pilot's plane is under fire.

2 - Withdrawing is not an option, say your pilots have stripped away the fighter cover for a flight of bombers but are in no shape to carry on the fight? Tough. It's very much the stalinist approach of victory or death, if you go back to the map you're left at the tender mercies of the auto-resolve system (which will happily let four bombers wipe out a squadron) or you're forced to fight on and risk losing all of your pilots to problem #1. (Yeah having to tell your guys to bail out is irritating.)

3 - No big wings. The 'big wing' was a tactic in which several RAF squadrons would group together to engage enemy attacks together, it took time to set up but it helped even out the numbers against massive German formations. This game does not let you do that and instead expects you to fight off dozens of planes with just eight of your own which leaves you at the mercy of problem #2 wherein you cannot withdraw should carrying on the fight become foolish which is particularly infuriating if you have another squadron or two nearby that could take over.

4 - The voiceacting is terrible, I had to turn off the audio for the tutorial guy just because I couldn't stand the sound of the mans voice.

5 - If you accidentally create a squadron at your airfield when that airfields squadron is in the air, tough luck. Doesn't matter that this new ghost squadron has no planes, you can't delete it, move it or do anything with it and you now have as many as eight rather expensive flying machines in the air that can't land because the airfield 'is full'. Despite the ghost squadron again, having no planes.

If you have your heart set on this game wait a few weeks or even a month or two for some patches to come in, otherwise you're setting yourself up for an absolute pain in the rear.. Im a great follower of the Battle of Britain and well i played this for a few hours to get a good feel for the game.

Cons
Quickly gets boring and repetative
Quote "Great customisation tool for pilots" but they aint around long enough to enjoy it!
Too hard at times (bombers are always 100% accurate)
Not enough to do during game..
No auto patrol feature (gets monotonous dragging mouse around screen then they take off on their own and will fall out sky if u leave them :\/)
Hardly any planes to choose (could have added Blenham bomber, Fairy battle and Paul Defiant might have made things a bit better)

The first half hour i admit was fun,...getting used to the controls fight screen and map.... then after naming pilots then watching them all die in blink of an eye....things start to get tough.... nothing wrong with that... makes the game more challenging... but theres just not enough to do to make the challenge fun...you only have a max of 8 planes..u can use... and no matter how many squadrons you have ...in<\/a> a fight you can only use 1 (max 8 planes) ... after first few fights its the same thing over and over.... repetative is an understatment and 2 different planes (Hurrican and Spitfire) that (in the game) fly exactly the same...just better shield on hurricane... but you hardly notice the difference.
The map screen... well apart from biting your nails watching the \u00a3 meter rise painfully slowly there aint a lot to do... you can train your 8 pilots per squadron (takes a while to get a squadron and then train them fully) although you can fast forward time which helps. Then before you can buy a radar station bomber formation apear out of nowhere and bang your squadron gone... If that aint annoying enough... your airbase is probably gone too..(or seriously damaged and unoperational) ........dont get me wrong games should be challenging....but make it fun at the same time... lets face it the game aint historicaly accurate so who cares if you pull a few strings and make changes for the better.
One more annoying thing is...when your base has been hit and nearly destroyed you might still have a few pilots there... i made the mistake of buying 6 planes for them,..thinking i would then spend money repairing base...... but then the squadron disbanded i lost the base the squadron and all the planes id just bought! costing over \u00a350k which takes a long time to get!!

The idea of the game was thought up well...and could have been a much more fun experience but as it stands ....i cant recommend this it not even for the low price of \u00a35.50. Buy it! very good game , if you like the battle of Britian 1940
, the pilot sounds during combat are classic, they yell and shriek , cheer and jeer,
action is fast pace with fast forward button and AI on the 50 days mission is keen and plentiful
I would like some more stats of individual pitlots and the ability to de commision squadrons ,
maybe choose the squardron from a list rather than be given one , I also would like to play German
overall the Major gives it 4 of 5 stars. This game is so close to being good, but it falls short in a few ways that by themselves aren't a big deal, but together create a poor experience.