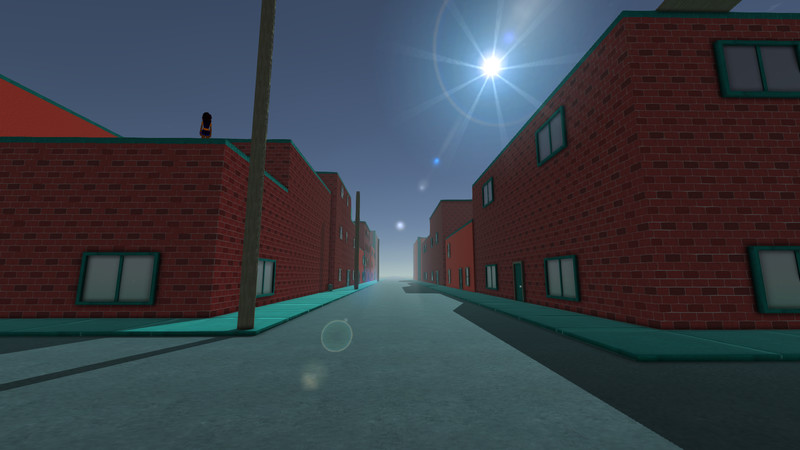 Going Nowhere: The Dream is a 3D, first person, parkour inspired platformer taking place in Loren's dreams, memories and life. Playing as Loren, you navigate the dreamscape to get Loren's long lost friend Violet back to the real world after she mysteriously appeared in Loren's town for the first time in years. Discover a deeper meaning to Loren's myserious dreams and Violet's apparitions. 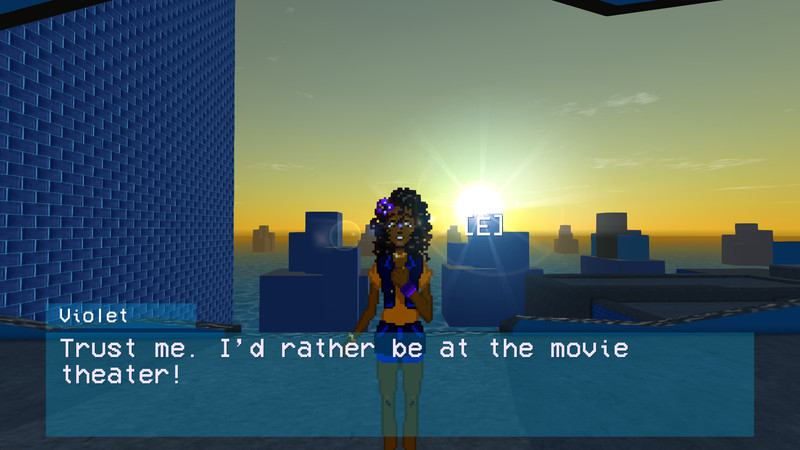 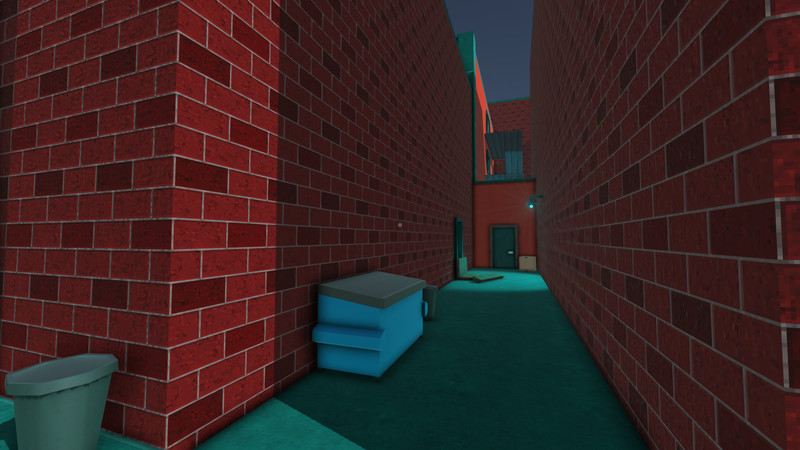 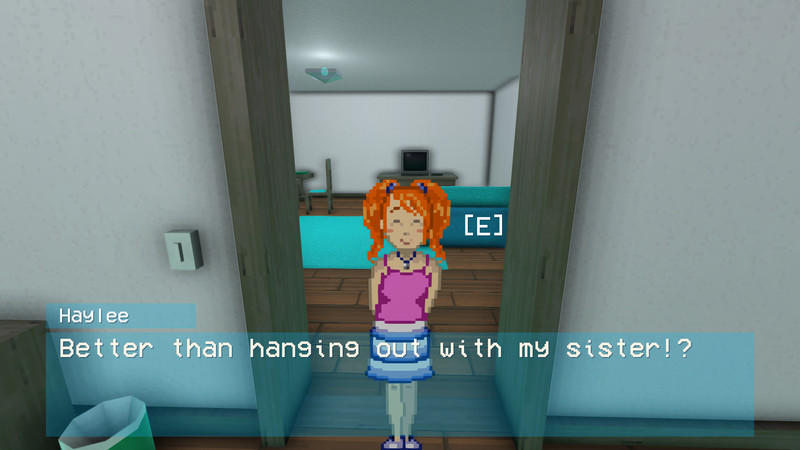 Following my review, the developer and I had a long chat about various aspects of the game and other subjects, including his next project, which he hopes will greatly improve upon the experience here.

I learned that he intended for a community to form around this game and work together to figure out certain unexplained mechanics and locate the secrets, not for each player to try to do it all himself. Indeed, obtaining all the secrets requires several types of unconventional thinking that I do not regularly employ because other games do not expect it of me, but which a group would be much more likely to suggest. Of course, one cannot simply expect his game to be successful enough to generate that sort of interest and cooperation, but knowing the intention here does soften my opinion of the game a bit.

Additionally, the developer seems quite aware of the game's flaws and is open to substantive criticism and suggestions, so I am optimistic about his future work.

However, the following review does still stand.

A game that does not respect my time is a game that I cannot recommend.

The mediocre main story is only around 40 minutes long, so the bulk of the game involves hunting down the various secrets and alternate endings. This is where things break down.

Perhaps the biggest problem with the secret hunting is that literally half of the levels take place on the same blocky, mostly empty map, with only minor differences among the chapters. I spent a long time running along identical rooftops and jumping over identical fences down similar alleyways (there is some variation to interiors, but secrets are usually outside), totally unsure if I was heading toward a dead end, an inescapable area, or one of the secrets. Each new chapter on the map also involved going back to the same places just to check if new secrets had appeared, which was sometimes the case.

Furthermore, since not every secret is meaningful or tied to an achievement, discovering something did not necessarily feel rewarding. Even when it did, it was minor: a few lines of dialogue adding little to the story or joke memes. I'm not sure why the developers put such an emphasis on this part of the game if they weren't going to do anything significant with it.

Traversal of a bland, empty world for meaningless rewards would be bad enough in any case, but there are also no in-game hints or nudges, no guide outside of the game, no map. The player is utterly directionless.

As for the game in general, various other design decisions work together to frustrate:

*Checkpoints are granted sequentially: they exist in particular locations in the level and are overridden and "deleted" upon reaching the next one. If the player has reached the end of a map and wants to return to earlier parts to explore, this means that every death will spawn him at the end of the map rather than at a checkpoint closest to the location of his death or at the last safe platform before that death.

*Some secrets\/achievements require carrying an item across the map, but there is no inventory system. The item literally has to be carried by hand and thrown over obstacles, since the player can't climb while holding an item. Of course, if the item falls into a pit, it doesn't respawn near the player or on the ground nearby. No, it respawns all the way back at its original location -- if you remember where that was. Enjoy either backtracking to that location or dying to respawn at a distant checkpoint, only to have to attempt to take the item back to the goal -- if you can find it and recognize it as such.

*Accessing secrets often requires finding and carrying boxes or trash cans to walls to build towers to ascend. This can be tedious enough on its own, but these objects are also subject to physics, so placing them on top of each other and jumping on them without shifting them around can be a chore. Running with them in hand is also a visual mess.

*The wall jump mechanic is only granted after completing a secret level, which is only accessible after completing the game. It is also the worst implementation of such a mechanic that I have ever encountered. I have to wonder why this essential parkour element was left out of the main game.

*The final level forces the player into extremely slow and lurching movement for story reasons, which is fine except for the fact that exploring the level (once again, wide open and mostly empty) for secrets takes far too much time accordingly. I felt like my time wasn't being respected in the previous levels, but here I felt like the developers were just being sadistic.

Beyond the flaws in the design, the game suffers in other ways:

*It doesn't explore its platforming to its full potential: there are never any hazards besides pits, platforms don't ever move or do anything interesting, and the difficulty doesn't escalate as the game, short as it is, progresses. The wall jump is barely explored at all simply because it isn't available until after the end of the game. This was a big missed opportunity.

*The story is nothing special, nor could it have been with what little dialogue there was in such a short time.

*The music is nothing special and often seems to disappear. I don't know if this hurts the game, but it certainly doesn't help it.

*I don't have a problem with Minecraft-like visuals, but here they seem very lazy, especially in the exteriors. I already mentioned that this is bad for secret hunting, but it's also just unpleasant to look at identical brick or rooftop textures stretching across the screen with no detail whatsoever.

Don't be fooled by my hours played. I wasted a lot of time and I don't look back on the experience fondly.. Quick, pixely game with parkour runner mechanics. Mirrors Edge without guns or combat. The story is kind of hamfisted but ultimately enjoyable. The game is shorter than I would have liked, but that's much better than trying to artifiially stretch out the game. Would recommend!. So, I bought this game without any real expectations and im glad for it. Don't misunderstand, it was worth the money I spent on it but I was expecting a parkour game. It kinda is, but its more like running from point to point to get to story nodes. The parkour and movement it is very...floppy? Floppy is the only word I can think to describe it.

The character doesn't have a lot of traction keeping her on the ground, which means sprinting up a ramp will result in broken legs most of the time. There were a few times where I was confused on where to go, but that was more me not taking any hints rather than the games fault.

There are multiple endings from what I can tell and a few achievements for finding secrets etc.

The story for the game was rather predictable, but the actual writing itself was well done, and made me feel a little sad at the main ending which is quite good for a game that took less than an hour. Some people may be saying "An hour? I don't want to waste my money on that!" which is a valid opinion, but I think if they tried to stretch it into 2 or 3 hours it wouldv'e degraded the experience as a whole.

Overall, while the gameplay isn't the best the story makes up for it, and although it is less than an hour long if it was any longer it would degrade from the experience. loved the game, great music, atmosphere, gameplay, art style, its all just really enjoyable. sure its not the longest thing ever but i dont think it needs to be, the world is far more open then the look of its narrative focused linear looking gameplay may seem, its as enjoyable as a scavenger hunt\/puzzle exploration game as it is a platformer.. It's like a 2D Mirrors Edge and it was pretty good, although it could have used a bit of the climbing or wall running mechanics, it was a pretty decent game with interesting NPC graphics. The story was not all that enticing or eye opening but the gameplay left something to be remembered and at the price tag they're suggesting, I'd say that's pretty fair. In fact, I wouldn't mind paying $5 to add this to my collection.

One flaw is the ladder climbing shadow/animation- this comes up often, your characters arms go haywire and your shadow keeps her arms to her side.

Overall, it's a good game with some flawless controls. It's short, it is. But worth a play through.