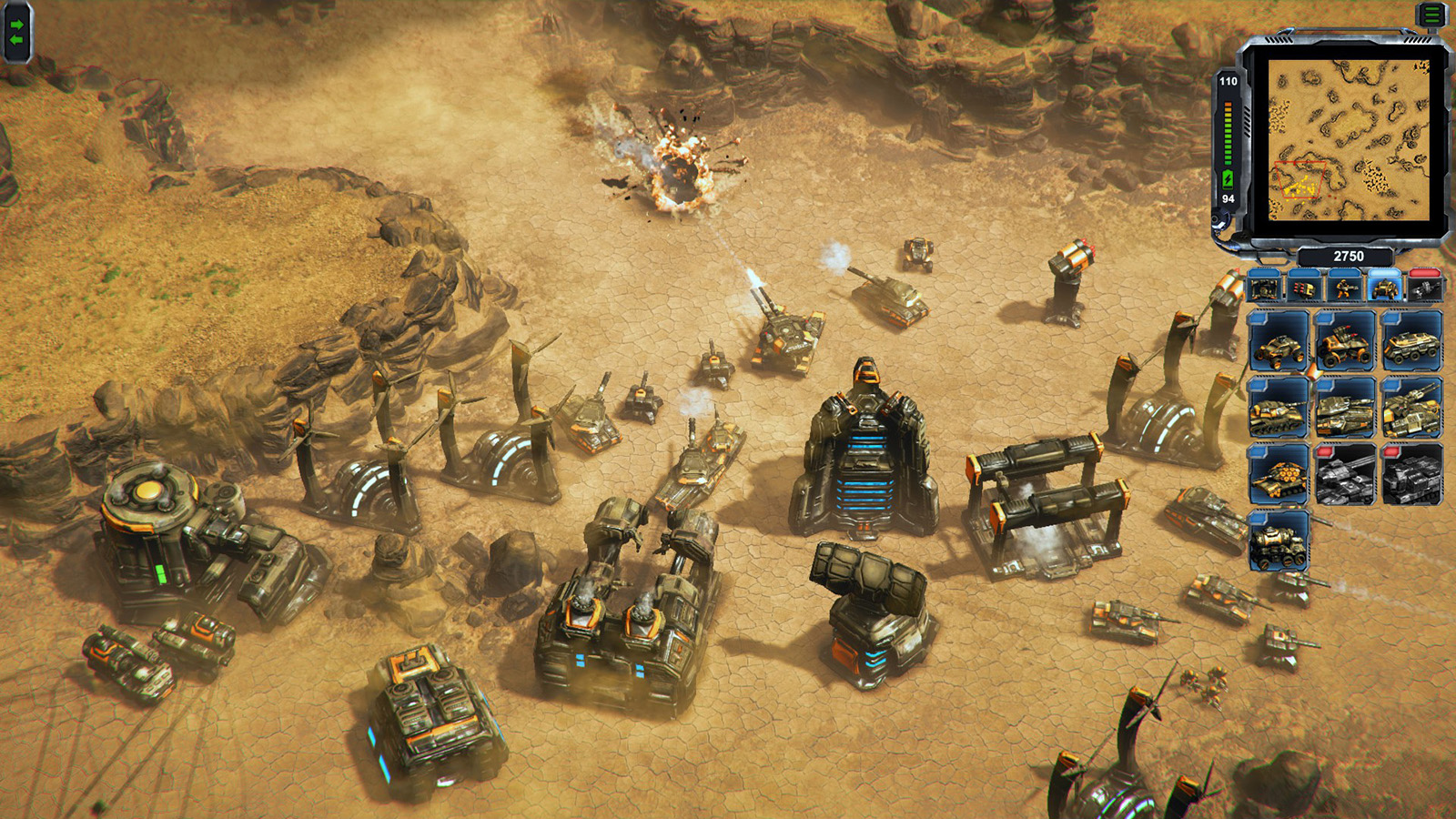 Reconquest is a real-time strategy base building game. After World War III, mankind got close to extinction. You have to reconquer Earth by making better strategic decisions than your opponents. The most valuable resource that still exists is radioactive shale gas, and its possession will determine the outcome of battles.

The game can be played in 3 game modes:
- In campaign mode you can choose from the two sides: the urban forces and the outlaw clan. Both sides has 10 individual story missions where comics connects the story line between the missions.
- In skirmish mode you can compete with 3 AIs at maximum on 8 different maps.
- In trapped mode you can choose between 8 preset challenges. 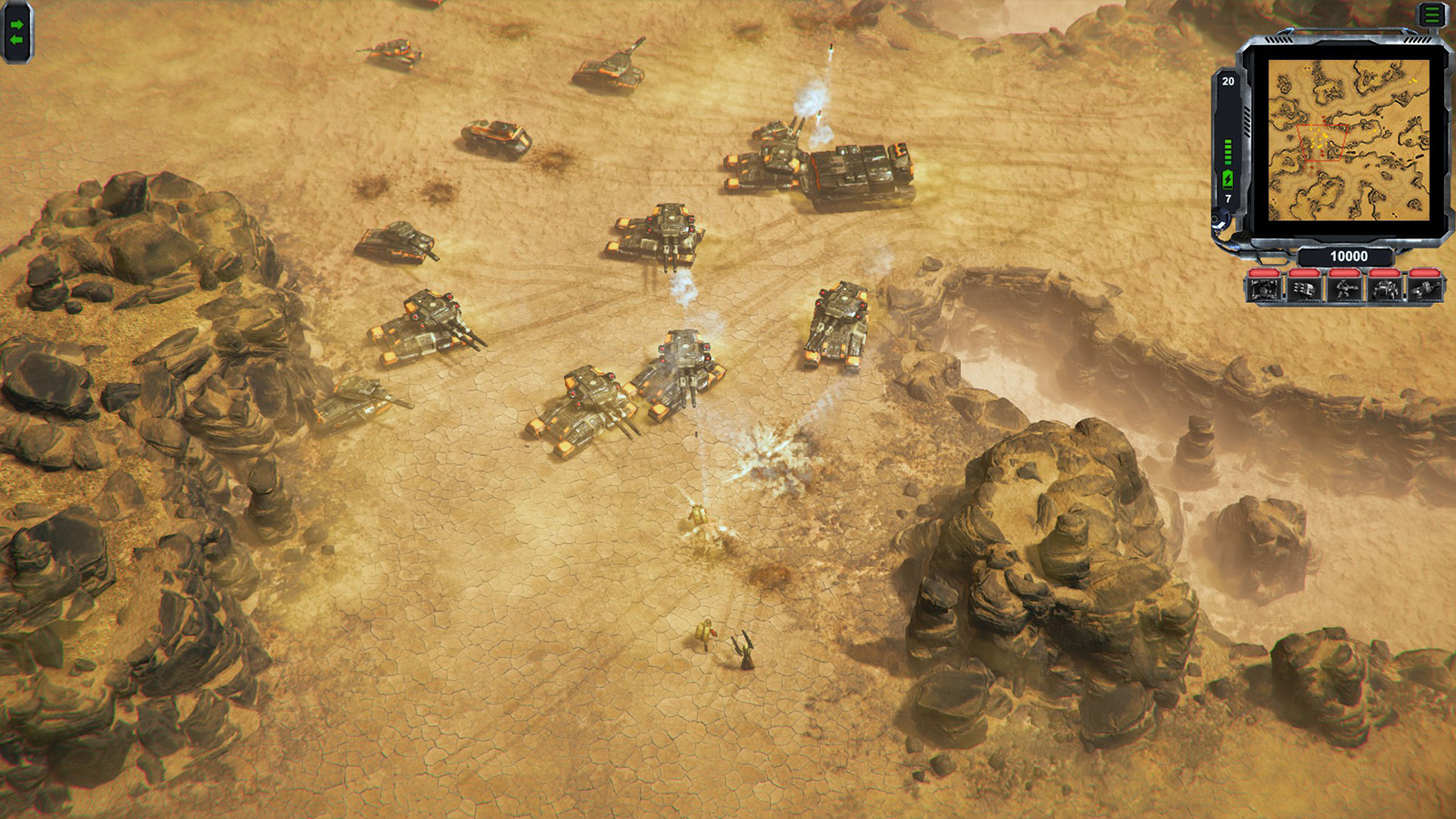 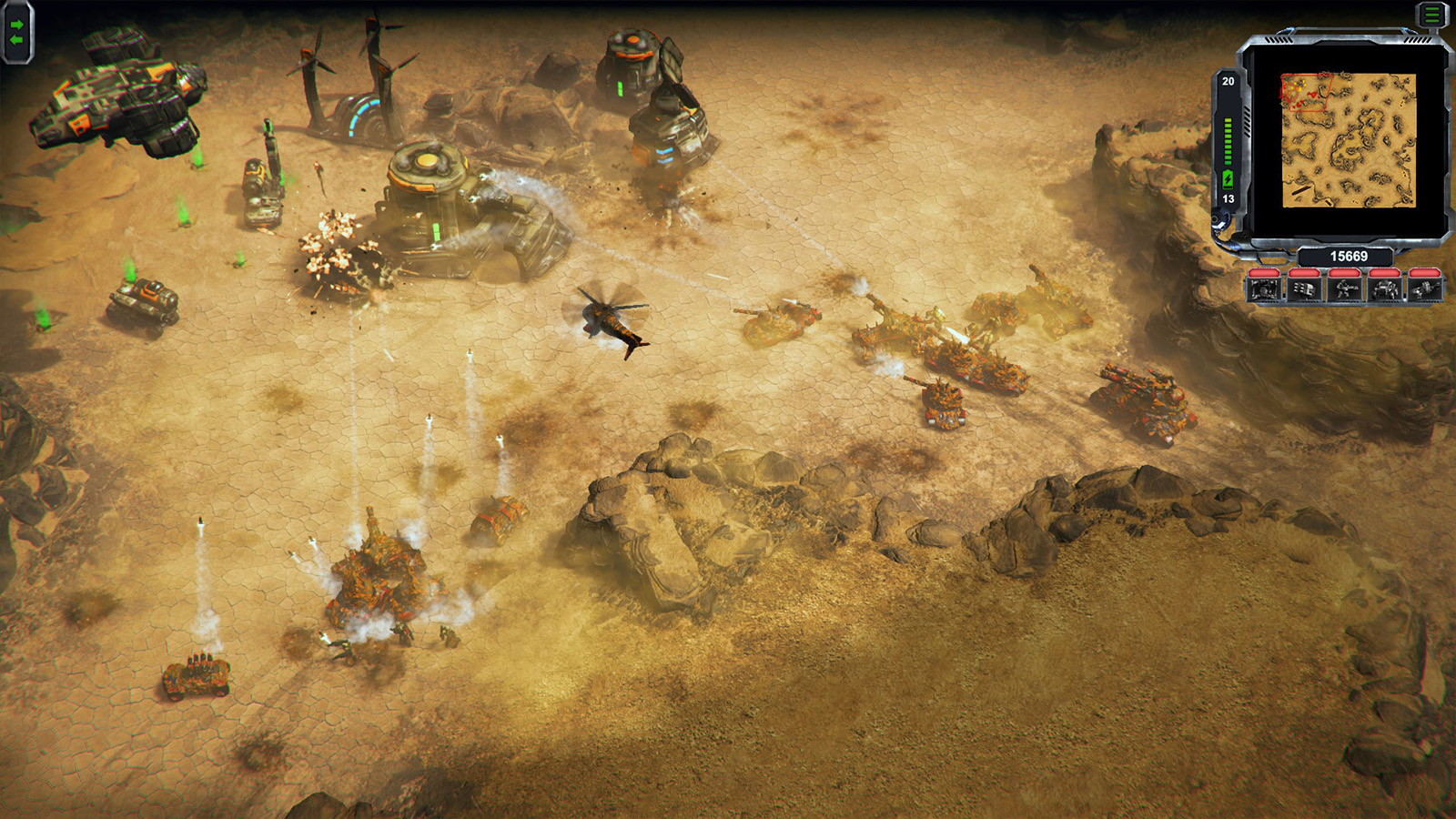 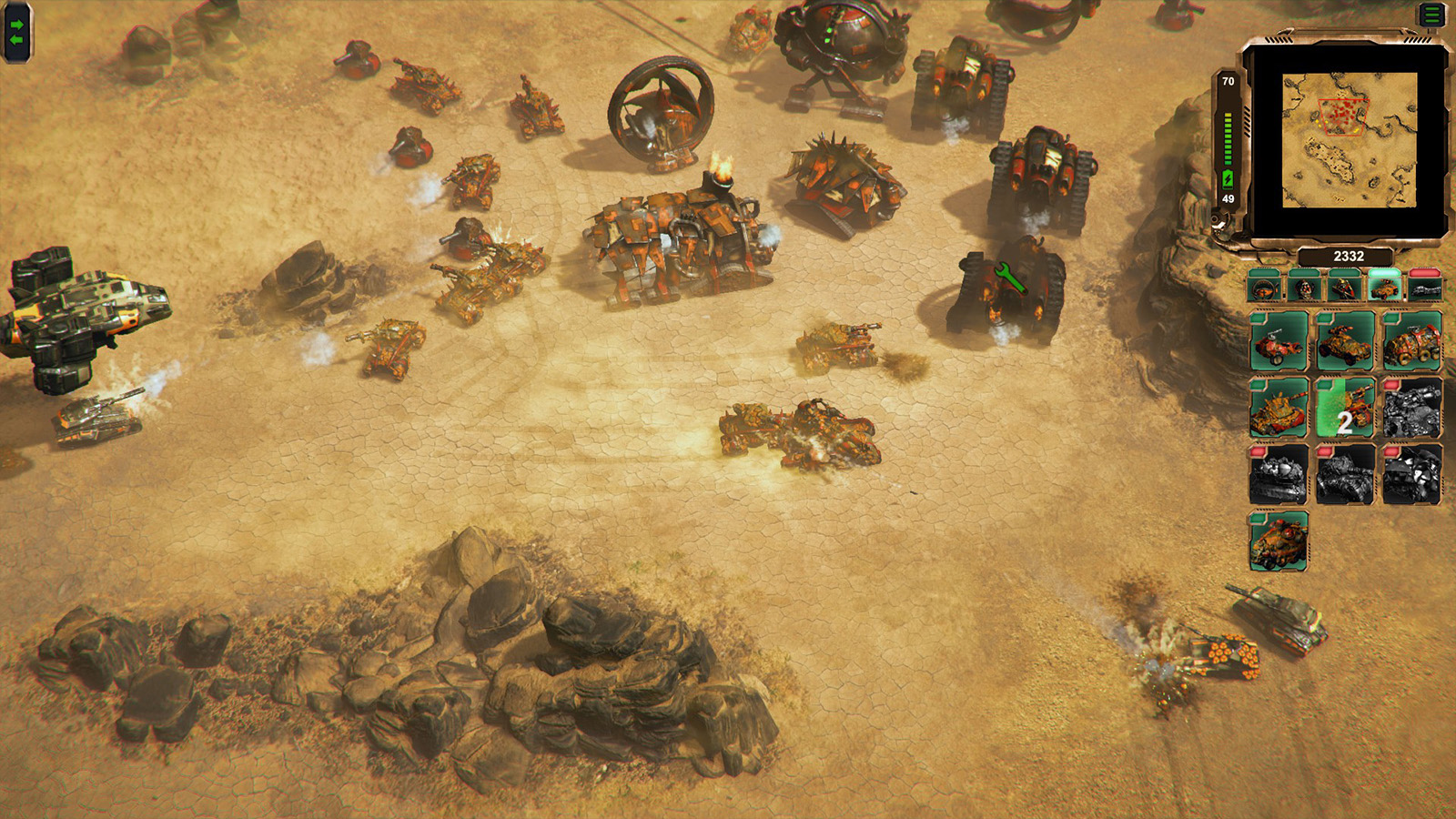 
Well, it scratches some nostalgia. But that is it. For 5 minutes... The trailer is misleading aswell. You cant fire up to ledges or from ledges making strategic placement a joke. It wants to be C&C, Dune 2000, KKND but it fails on all levels. There is one tactics. Beeline to Cannon Tower. Build 5 of those and the AI cant get past. Doesnt matter if its infantry or not. Then you can in your own time build up your doomstack and just waltz right in. The campaign is a joke. Its basically the same maps on boths sides with them doing the opposite. All units are the same with different models. The graphics are good enough but there is plenty of hit detection bugs where units are pushed out over an edge and just stands there glitching up and down. The UI is good enough, to few indicators (like no deploy mouse cursor when moving an MCV), some tried and true staples. It works good enough. The healthbars are overly big for some reason. It hits some tropes and nostalgia and what makes an RTS great, but it misses out on the majority makin this the most mediocre 6 hours of RTS ive ever played. Go back and play the old ones instead. Or if youre making a new one, play the old ones and see what made them great.. Too fast paced. I believed the reviews that said it was like Dune 2000 or the old C&C games. Well it's not. If you like losing units with 1-2 shots and do the same to the enemy and not thinking about tactics or anything like that just keep building units and sending them to the enemy base, then go for it. If you can get it on a sale. If you want something like the old fashioned RTS titles then stay away from this game.. Reconquest is a classic base building resources collection C&C style RTS game, the camera is fixed so it is like 2D rts games from 90s, it mimics C&C3 Tiberium wars UI, it have the feeling, environment and story close to what Krush Kill 'N Destroy (KKnD) have and also similar to SunAge. it have variety of units specially for vehicles you have small tank, stealth tank, heavy tank, another heavy tank with two cannons and rockets and another artillery heavy tank with three cannons!, it is single-player only so the AI is your only friend so if the AI is too hard or too easy the game is ruined, it seems that the AI is too hard in the campaign mode (note the game was updated 12\/18\/2016 and issue with AI on the campaign is solved now ), I played against AI on skirmish and it is okay , I didn't try trapped mode yet which include extra missions for each faction, I liked this game art style and the fast paced gameplay, it is fun and worth the price. I thanks the StormCube team for fixing some issues with fast updates.. Cool indie game! Graphics are nice and the game brings back a lot of C&C memories. Base building RTS games are not dead yet!. Well to be very honest. I played like 25mins with are (from my point of view) enough to tell that this is sadly not going to work to revive the base building RTS genre. And i was actually quite looking forward to this release.
The vehicles are unbalanced, riflemans are cannon fodder just like the low tier vehicles. A pile of "defenders" & tanks will do the job if its correctly done while some Turrets (with an insane OP build range) will keep your base defended quite decent.

The setting, the 2 factions and the basic ingame build menue are sort of C&C RedAlert, Tiberium style which is a nice thing actually and the soundtrack also sounds a bit like a RedAlert game. But its missing the seperate windows for units and the unit shortcuts.

Graphics are ok for beeing a game that builds on the unity engine.
Problems are: pathfinding, initial base placement on the start of a skirmish game, terrain collisions (some rocks seem to not have any colliders and rockets are just going through them)


It is sad that C&C died and the base building RTS with it. reconquest is a small flag at the end of the horizon but... Its not good for an actual release. I dont know if it would be better to be released as an early access but as it is as an actual released game. It just does not work.. I am personally enjoying this title. The AI is a little easy and predictable but it is good enough to keep you coming back for more. Being a huge RTS fan, here are the Pros and Cons of what I liked about the game: