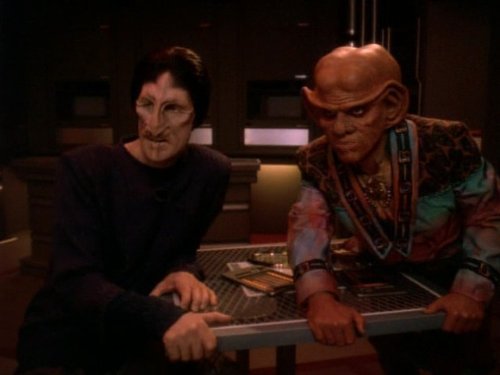 A damaged Defiant must play a dangerous game of cat-and-mouse with two Jem'hadar ships inside a gas giant.
Captain Sisko is asked to mediate on the Defiant between the Karemma and the Ferengi. Hanok, its representative, finds there's little profit in trading with them. Quark has made up all sort of non-existent fees and Sisko is not amused. Then two Jem'Hadar ships suddenly attack the Karemma ship. It tries to flee into a gas giant planet with dangerously high wind speeds, but the Jem'Hadar still follow. Sisko orders the Defiant to go after them to help the Karemma. With barely any sensors, and the phasers inactive, the crew must be creative. The situation brings contemplation. Kira reevaluates her relationship with Sisko as both captain and the Emissary, while Worf learns a few things about command.
When the Defiant goes to the gamma Quadrant to attend trade discussions with the Karemma they are discovered by two Jem'Hadar warships and forced to hide in the atmosphere of a gas giant. When they are attacked again the ship takes heavy damage which leaves the bridge out of action, Dr, Bashir and Dax trapped in a turbolift, Worf going to the engineering to control the ship from there and Quark and the Karemma representative trapped in a room with an unexploded torpedo.

While there is plenty of action in this episode it isn't at the expense of character driven scenes; on the bridge Kira must keep the wounded Captain Sisko awake, in engineering Worf learns that to get the best out of the engineering staff he must give them the opportunity to come up with creative solutions to problems rather than just bark orders like he would on the bridge, Quark teaches the Karemman that some times you have to gamble as they try to defuse the bomb and Dr. Bashir reveals one of his fantasies to Jadzia. None of these scenes seemed superfluous each developing the characters featured. The acting is good throughout and the story well written. "Starship Down" is an interesting episode and plays in many ways much like an old WWII submarine film. This is not a bad thing, as in the original "Star Trek", one of the very best episodes ("Balance of Terror") had a similar sort of style.

The Federation is trying to work with some folks from the Gamma Quadrant who want to break free of their Dominion masters. However, the Jem'Hadar show up and threaten to not only destroy the aliens' ship but the Defiant as well. To avoid this, the ships go into the atmosphere of a nearby planet--and here the sensors don't work very well and all four ships are running blind. So, like old submarines, they slink about--looking for an opportunity to destroy their enemies with only the simplest of weaponry.

This is a very simple and yet very gripping episode. It's one of the best of the season--mostly because plots like this are hard to screw up!